Farming initiative helping those at risk of social exclusion 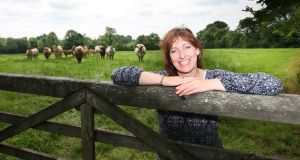 The mother of an autistic teenager who a year ago was “ banging his head off the fireplace” has said the Government’s social farming programme has turned his life around.

Minister for Agriculture Michael Creed was in Co Leitrim to launch the extended “social farming” initiative for many areas of the country. It targets people with mental health and physical challenges, as well as other vulnerable categories, who are at risk of social exclusion, and get an opportunity to spend time on a working family farm.

The extension of the Social Farming Network programme was unveiled on the family farm of Michael and Siobhan Heslin at Gortletteragh near Mohill, Co Leitrim. They host nine participants, many with mental health issues, on their 55-acre farm each week.

“We benefit as well,” said Mr Heslin. “Making 55 acres of Leitrim land sustainable is not easy.”

He said that opening his farm up to these service-users meant that he had been forced to improve safety on the farm , while having so many extra hands permitted him to do many non-essential tasks to which he would never otherwise get round.

Dubliner John Murphy (45), who some years ago was diagnosed with post-traumatic stress disorder, told Mr Creed that since being referred to a social farm in 2013 he had gone from 19½ stone to 14½, and had halved his medication.

The project is being co-ordinated by Leitrim Development Company which previously ran a cross-Border social farming programme and is now liaising with three other agencies, the South East Waterford Leader Partnership, West Limerick Resources and South West Mayo Development Company, in a bit to expand its reach. The Minister announced an additional €350,000 for the network.

The Department of Agriculture provided initial funding of €400,000 last year for the establishment of the social farming network, and has recently extended the contract for a further 12 months.

Already 400 people have been allocated places on family farms, while over 1,000 family farms and service providers around the country are involved. The programme will expand to target other vulnerable sectors, including youths at risk, people with dementia and refugees.

Mr Creed acknowledged that few people were aware of the role the department plays in countering social exclusion “but this is a movement that is on the move and will grow”.

Describing family farms as the “the bedrock” of Irish rural life, “a bit like the GAA”, he said it had a key role to play.“For too long we were a society who locked these people away.”

Sean O’Rourke (37), from Carrigallen, Co Leitrim, said he had been referred to the Heslin farm by the mental health services.

“It’s great to get out in the open and to meet people, and to have a reason to get up in the morning,” said Mr O’Rourke. “We did up an old horse cart here with Michael, and you get a great sense of achievement when you do something like that.”

Sean Mitchell (63) from Mohill, who previously battled depression, said his life had been changed since he started spending time on the Heslin farm.

“I had a nervous breakdown. I am gradually getting better. I enjoy being outside, and it’s good to have a purpose and a reason to get up in the morning.”

Siobhan Heslin pointed out that placements last for just eight weeks, and said many of those referred to the farm would benefit from a more long-term approach.

“I think it should also have a nutrition element,” said Ms Heslin, whose family kitchen is open to all the service-users.