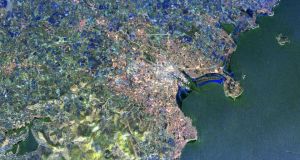 Dublin from space: a radar image distinguishes between densely populated urban areas and relatively unsettled areas on the edge of the city. Photograph: Nasa

Ministers have discussed the possibility of creating a new city in the midlands or northwest to ensure that population growth does not choke Dublin.

During Wednesday’s special Cabinet meeting in Co Kildare there was also discussion of a potential post-Brexit scenario in which Belfast rather than Cork was the second city in a united Ireland.

Minister for Finance Paschal Donohoe briefed his colleagues on the Government’s 10-year capital-investment plan for 2018-27 at the day-long brainstorming session at Castletown House, in Celbridge.

Minister for Housing Eoghan Murphy gave a presentation on the national planning framework known as Ireland 2040.

“A key issue discussed was the need to ensure that the potential implications of Brexit, particularly for rural and Border regions, is fully reflected in planning and investment decisions,” a Government spokesman said.

The possibility that Ireland could have an all-island economy or be a united political entity by 2040 was discussed, as was the risk of depopulation and decline in the Border region and the need to increase connectivity to Northern Ireland.

The meeting was the first of the “off site” strategic planning meetings that Taoiseach Leo Varadkar committed to when he took office. The first part of the day focused on climate change and the second part on the economy.

Discussions centred on the need to take policy decisions that would ensure population growth would not happen in a disproportionate way that could choke the capital city, according to senior Government sources.

The Government has committed to publishing the new national planning framework and 10-year capital plan before the end of the year.

“The special meeting reflected the Taoiseach’s objective to ensure that Ministers have sufficient time, outside of dealing with the normal busy weekly Cabinet agendas, for in-depth discussion on some of the big strategic issues facing Ireland in the years ahead,” the spokesman said.