Transphobia: ‘You just don’t understand why someone has so much hate for who you are’

Call It Out campaign seeks to raise awareness around transphobia, homophobia and biphobia 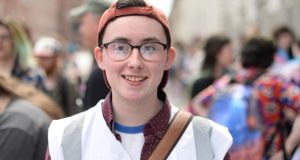 Cameron Keighron, whose Facebook ordeal is just one of the many experiences of transphobia, homophobia and biphobia highlighted in the new Call It Out campaign. File photograph: Dara Mac Dónaill

In October 2018 Cameron Keighron received two death threats online. The first, which read “I hope you die”, appeared under a Facebook status he’d posted about his positive experience of transitioning to become a man.

Keighron deleted the message, blocked the user and reported the incident to the Garda Síochána.

A fortnight later he woke up one morning to discover a new comment. “They told me that I should kill myself and that I was a disgusting freak of nature and how could any organisation want me to work with them.”

He immediately felt deeply afraid for his safety.

His mother’s reaction to the message distressed him further. “Seeing how she felt . . . it was worse because not only was this affecting me but it was also affecting my family. When I came out as trans, the first thing my sister said was she was scared for my life going forward.”

“You just don’t understand why someone has so much hate for who you are and for what you identify as, that they wish that you weren’t breathing any more. In that moment I felt pure fear and nothing else. Feeling pure fear – there’s no words to describe what that does to your mental health and your mental state.”

Keighron’s ordeal is just one of the many experiences of transphobia, homophobia and biphobia highlighted in the new Call It Out campaign which is seeking to raise awareness around the abuse and harassment many people in Ireland encounter because of their sexual orientation or gender identity.

Only a third of Irish people believe LGBT+ people in Ireland are at serious risk of violence, despite the fact that one in three LGBT+ have been threatened with physical violence and one in five have been punched or physically attacked in public during their lifetime, according to research released as part of the campaign.

A survey of 1,395 people carried out in late 2018 found 36 per cent believed violence against the LGBT+ community was “a serious problem”, while research conducted by the University of Limerick found 80 per cent of people believe bisexual and trans people should be free to live their own lives.

The Call It Out campaign, which is a joint initiative of the Transgender Equality Network Ireland (TENI) and the Hate and Hostility Research Group at the University of Limerick, is set to roll out across billboards, poster sites, social media, radio and through regional events to appeal to the wider community to support LGBT+ people when confronted with hostility.

Homophobia still exists in our culture, in our workplaces, in our schools. We need to combat it wherever we see it

“We want to send a clear message that homophobia, biphobia and transphobia are not acceptable,” said Ellen Murray from TENI, adding that the general public should call out this hatred and support those who experience it.

Broadcaster and fashion designer Brendan Courtney, who has shared his experience for the campaign of being attacked for being gay, warned of a “general apathy” toward homophobia in Irish society.

“Because of the Yes marriage equality success that we had there’s a general consensus [it] doesn’t exist in Ireland any more but it very much does.”

Courtney, who was punched in the face outside a nightclub in 2010 and subsequently received death threats, said the attack had a lasting effect that made him very resentful. “Homophobia still exists in our culture, in our workplaces, in our schools. We need to combat it wherever we see it.”

For Keighron, the goal is to give people the strength to speak up about their experiences. The Government and the Garda must also recognise these incidents have a “real-life effect” on people and are not just “sentences on a piece of paper”.

“I got to the point where I was thinking this person has got the reaction out of me that they want, and I didn’t want to give them that. I didn’t want to be a victim... I’m a valuable person to society and I know I can contribute in several different ways. I have every right to be here no matter how I identify, just like everyone else.”