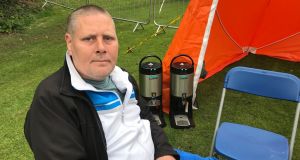 Peter McNamara, who has been homeless for more than a decade was availing of the chiropody service at HopeFest

Haircuts, chiropody and mindfulness were among some of the services on offer at a festival for people experiencing homelessness in Dublin on Saturday.

Several hundred people came to the Iveagh Gardens for a summer party organised by UCD Lions club and the Dublin Simon Community.

The party had a festival feel, with various food vendors, a wellness area where guests availed of services, such as haircuts, chiropody and manicures with music provided by the UCD community choir.

Felim Moylan of the Dublin Lions Club said they wanted to ensure the event was as “high spec” as possible for the homeless people attending.

“It’s about giving dignity to homeless people and our staff recognising the issue of homelessness sand taking any small steps they can to help. We have kept they standard of all the various services on offer today to a high standard so homeless people availing of them today are treated with respect and dignity,” said Mr Carthy.

Peter McNamara who has been homeless for over a decade was availing of the free chiropody service at the event.

“I sleep on a roll out bed in a hostel and I have to leave at nine in the morning so I’m walking the streets all day. It’s great to go here and have my feet looked after,”said Mr McNamara.

“People who would have never expected to become homeless are ending up in hostels and emergency accommodation now – I don’t think I’ve ever seen the situation as bad as it is now,” he said.

Barber Paddy Knott was among those giving free haircuts and trims to those in attendance. “We volunteer in the GPO every Friday so it’s great to come to an event today and make people feel and look good. It might seems like it’s not important when you’re living on the street but having a good haircut gives people some dignity and lets them know that they matter,” said Mr Knott.

Jakub Wocial who is originally from Poland said it was the first time he had his hair cut in over a year of living on the streets. “I feel like a new person. We don’t usually get to come to nice events like this or are made to feel welcome,” said Mr Wocial.

Brother Kevin of the Capuchin Centre said the event is crucial as homeless people are treated with dignity and respect.

“Pope Francis visited the Capuchin Centre in August and one of the main points he emphasised was that dignity and respect should be shown towards all people but particularly homeless people,” he said.

“I would like to say to the Government – get people housing, get them out of hotels, give them proper accommodation and treat them with dignity and respect,” he said.