How a ‘big-hearted’ Co Meath community sponsored a Syrian family 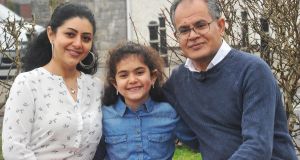 When Zuhair Fakir, his wife Angham and their eight-year-old daughter Lorca arrived into Dublin Airport shortly before Christmas last year, they were surprised to discover a large group of smiling Irish faces waiting for them in the arrival area.

The Syrian family had been selected for resettlement from Lebanon as part of the State’s pilot community sponsorship programme. In Dublin they were greeted by members of the Dunshaughlin refugee support association, who brought the family directly to their new home in Co Meath. The group had also arranged for Lorca to start school the following day.

“They did everything for us, all the logistics and governmental procedures,” says Mr Fakir, speaking from his home in Dunshaughlin. “We got our residency here, we got our PPS numbers and our daughter went straight off to school. They had organised it all, they thought of every single thing.”

Mr Fakir, a graduate in English literature, had been living in Lebanon for more than two decades when he decided to apply for asylum abroad with his family. Originally from the city of Daraa in southwestern Syria, he worked as a TV production manager before the war. His daughter Lorca was born while on a visit back to Angham’s home city of Damascus more than eight years ago.

“Being Syrian in Lebanon, the Lebanese authorities and government made it very difficult to move freely and it even impacted your visas. So we went to the UNHCR and registered in 2015. Then in 2017 they called me about the resettlement programme.”

The family was initially told they would be sent to Argentina but six months later this changed to Ireland. “We had an interview with the Irish delegation in Beirut, including people from the justice department and the gardaí. That was in June 2018, and they told us we would be in Ireland by the end of the year. That truly made us happy, we’d been through a very bad situation in Lebanon.”

Mr Fakir and his wife, a former English translator, are now searching for jobs in Ireland. “I don’t know how to express how we feel; we are delighted. We are open-minded people and we intended to start a new life here, we were prepared to do that. We found very big-hearted people in this community and a warm welcome.”