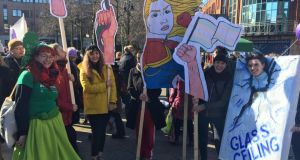 A number of demonstrators at the rally in Belfast on Saturday, March 9th. Photograph: Amanda Ferguson

Women’s rights activists in Belfast are calling for the British government to introduce legislation around coercive control and stalking.

A number of demonstrators at The Time is Now – Women Rise Up themed event also said their thoughts were with the family of the late Giselle Marimon-Herrera (37) from Columbia and her 15-year-old daughter Allison who were strangled to death at their home in Newry earlier this week.

Results of a post mortem have concluded that a 38-year-old man, who the PSNI believe was Giselle’s partner and who also lived at the address, died by hanging.

Police are not looking for anyone else in connection with the woman and girls’ murders.

On Saturday Women’s Aid chief executive Kelly Andrews told The Irish Times: “It is unacceptable that in this day and age that women are being murdered in their own homes.

“Intimate partner violence is real, it’s prevalent, women have been suffering it for centuries. No more. We are calling for an end to this and need to have appropriate legislation in Northern Ireland.

“The rest of the UK and Ireland has legislation on coercive control and stalking. Northern Ireland is the black hole because of a lack of a legislative Assembly .”

Ms Andrews said before the collapse of Stormont in January 2017 the justice department and committee had scrutinised legalisation that was “ready to go but there is no mechanism to bring it in”.

“We are calling on the Secretary of State Karen Bradley and the Westminster government to bring this urgent legislation into Northern Ireland immediately to help protect women,” she said.

“Often it is more than the woman who suffers,” she said.

“I dread to think how many children are in that situation.”

Louise Meek (21) from Belfast said International Women’s Day was a celebration of women but also to acknowledge that the “struggle goes on”.

Issues she would like addressed by government include “access to abortion, effective legislation to tackle domestic violence and extending cervical cancer and breast cancer screening to younger women” in an effort to save lives.

A spokeswoman for Doctors for Choice Ireland said a delegation was in attendance at the Belfast rally to “support the women of Northern Ireland”.

“Many women from the North supported the successful campaign repeal campaign so we are showing solidarity today,” she said.

“We want all women to be able to access safe, free, abortion healthcare.”

Esme Griffin (16) from Cork said it was important to attend the rally as “women’s rights are not acknowledged properly”.

“Lack of abortion rights, same sex marriage, the pay gap, mistreatment and street harassment have to be addressed,” she said.

Eileen Drumm from Enniskillen from Women Making Waves said women with disabilities had particular needs around “equality, access and inclusion for rural communities” she would like addressed by government.

Eideen Herron (27) from Derry said it was unacceptable that women from the North had to travel to Britain to access abortions.

She also called for schools to teach all young people about domestic violence.

“It is very scary how much violence there is in society,” she said.

“It worries me that this is not spoken about enough in day to day life.”