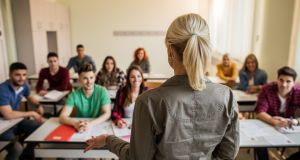 More than six out of 10 academic staff working in temporary and part-time roles are women. File photograph: iStock/Getty Images

Trade unions have called for an end to the “stark inequalities” and precarious working environments facing workers, particularly women, in higher and further education roles.

Union representatives from third-level institutions across the country gathered in Liberty Hall on International Women’s Day to discuss the “staggering” levels of gender inequality and precarious working conditionsm which persist among university and college academic staff and others working as cleaners, in catering and in administration.

Siptu deputy secretary general Ethel Buckley told attendees that many workers in third-level positions continue to be excluded from career progression with little chance of accessing secure work and that the current system was robbing workers of a stable life.

More than six out of 10 academic staff working in temporary and part-time roles are women while 45 per cent of those lecturing in Irish universities work on a non-permanent basis, according to research by the Higher Education Authority. Some 41 per cent of permanent full-time academic positions are held by women.

Siptu is calling for an end to the casual, insecure and precarious working conditions in these fields and the “exploitation of postgraduate labour”.

Unions are also calling for all directly employed staff categories and grades to have permanent, secure employment with access to progression, sick, pay and pension; a secure grading structure for all teaching staff agreed with the unions; restoration of family-friendly and leave polices; secure employment and progression for researchers and an end to the outsourcing of work.

Dr Deirdre McHugh from NUI Galway expressed the fears many academics have about voicing their grievances around pay and job security.

“I was afraid to speak up because I might lose what little I had. Academics have put an immense amount of work into getting where they are. It’s very difficult to walk away from that.”

Dr Jennie Carlsten from Queen’s University noted that caring duties are an added challenge for women working precarious hours and described correcting college papers while lying in a hospital bed after giving birth to her daughter.

“The issue of being a carer disproportionately affects us as women. When my father had a stroke and died my husband had to cover my classes because there was no provision for sick leave or bereavement for causal workers.”

“I have met many people who have given up on an academic career. The idea that if you do this long enough you’ll get funding is an impossible dream. No matter how much commitment you demonstrate it’s not enough.”

Speaking to the seminar through video link, Dr Aline Courtois from the University of Bath warned that exploitative projects had become widespread across universities.

“There are many different forms of low paid or unpaid labour that have proliferated. Hourly paid work should not exist in academia, it completely ignores the reserves that go into teaching, it’s insulting to academic work in general.”

“Years of under-investment and reduced staffing has taken its toll and the entire sector is rife with insecure employment,” he said. “It’s made it virtually impossible for workers to aspire to a stable career.”

Ms Buckley commended the Government for the introduction of the new Employment (Miscellaneous Provisions) Act earlier this week which restricts the use of zero-hour contracts but questioned whether all employers would fully adhere to the new legislation.

“Legislation on paper is one thing but how the conversation is interpreted by adjudicators and the Labour Court is another thing.”