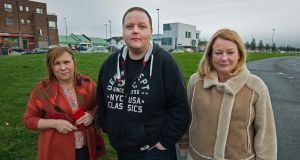 There will be protests on the streets if Sinn Féin and the left are not in the next Government, says Jacqueline Colgan (47), a community employment (CE) participant in Ronanstown, west Dublin.

Election 2020 was the first she took “a big interest in . . . Everyone in this area was really serious about it, asking if you were registered to vote. It was like ‘shame on you’ if you weren’t registered.”

And there was a “feeling of Christmas” as results came the day after the election showing spectacular returns for Sinn Féin, she told The Irish Times this week, as politicians began to gather in Leinster House.

“We’re not all traditional Sinn Féin voters at all. I think a lot of us would have looked to Labour back in the day. But we’ve had to say to the old guard, they are not fit to govern. People felt by voting Sinn Féin things might change.”

That just proves what it means to him – the passion, the drive, the love he has for working for people and change

Anthony Rochford (27), also a CE participant, says in the past he “didn’t really have any interest in politics. I felt it was the same cycle, same thing and nothing was going to change.” Like all his friends, he lives with his parents and sees no prospect of affording even to rent his own home. “I realised how important it was to vote to get change.”

In Ronanstown Youth Services, too, first-time voters chose Sinn Féin and People Before Profit (PBP), citing the housing crisis and inadequacy of student grants as issues. Rebecca O’Reilly (22) beams as she recalls the tears of relief shed by Gino Kenny (PBP) when he took the fourth seat without reaching the quota.

“That just proves what it means to him – the passion, the drive, the love he has for working for people and change.”

North Clondalkin lies within the four-seat Dublin Mid-West constituency, one one of the most disadvantaged parts of the State. In terms of political engagement, however, it is transformed. And it did not begin this year.

On February 8th, it rose again, according to local polling station returns, to 59.7 per cent – just shy of the constituency’s 61.6 per cent and almost at the nation’s 62.9 per cent.

“I am very emotional about this election,” says Colgan. “Fianna Fáil and Fine Gael, they have destroyed our country. I have family members who have committed suicide. I know five people over the last couple of months who have tried to kill themselves and it’s down to the Government.

“I have a grown son aged 30 living with me in the box room. My daughter, she has a degree in social care and shares a bed in my house with her five-year-old daughter. My other son, who has a great job, could never afford a house – even to rent. He rents a room in a house. I’m looking at people dying on the streets.

“I feel like people don’t have hope anymore, and it’s only going to get worse if they aren’t going to give Sinn Féin a chance. We want Sinn Féin in government. OK, we might have to go in with Fianna Fáil but we would see changes.”

“Bernie” (64, not her real name), a former Labour voter, hesitated before voting Sinn Féin, “because of their past”, but decided it was “the only option”. Her daughter and two grandsons, aged 22 and 18, have been living with her since 2017 after the landlord needed the house they had rented for nine years for his sister.

Her daughter sleeps on the couch while her grandsons take turns sleeping on a pull-out bed in a box room and on the floor by the couch. “The whole family voted Sinn Féin. When the counts were coming in I just thought, ‘Okay, they haven’t enough to go into government, but maybe they’ll go in with Fianna Fáil. I was very excited to think, maybe now.”

They sniggered all the way through those debates at Mary Lou, but really they’re sniggering at us

The vote cannot be “dismissed”, says Wills, as a protest or youth vote. “All generations voted for Sinn Féin. It wasn’t a protest vote. It was a ‘hope vote’. Please give us some hope.”

Fear, and anger, is growing, however, that a left Government will not be formed.

“In my heart I know they [Fine Gael and Fianna Fáil] have already decided they’re going back in,” says Colgan. “People like us, we are just bugs to them. They sniggered all the way through those debates at Mary Lou, but really they’re sniggering at us.

“They say Sinn Féin are not fit to govern? There will be marches. I am not accepting Leo [Varadkar] or Micheál [Martin] as Taoiseach. I couldn’t cope. No, there will be protests.”

Bernie agrees, saying: “I would go out and march.”