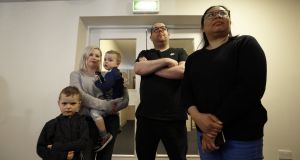 A group of tenants facing eviction from an apartment complex in Tallaght, Dublin, have taken their case to the Residential Tenancies Board (RTB) after alleging a bid to remove them from the property may be illegal.

The tenants live in Exchange Hall on Belgard Square North, which adjoins the main entrance to Tallaght Hospital and is just north of the Square Shopping Centre. A significant number of the affected tenants are working in the hospital nearby.

The fifth and six floors of the complex have been listed for sale as an “investment property” by McPeake Auctioneers in Tyrrelstown. The listing says there are a total of 30 one and two bedroom apartments on the floors, while there is one studio unit.

The apartments are described as “fully let”, although at least nine tenants have said they have been issued with eviction notices in recent weeks.

Under the so-called Tyrrelstown amendment, passed last year with the aim of giving tenants greater security of tenure and rent certainty, funds are limited to evicting no more than 10 tenancies at once.

Ian Healy (39), a porter at Tallaght Hospital, said he and others who received the notices are long-term residents and as a result are paying rent below market rate. He said the group is in talks with the RTB and that he expects the number affected to rise.

“We’re definitely sure of nine or 10 who have been issued with eviction notices,” he said. “There is an embarrassment in admitting to it, which I completely understand.

“I moved in here in 2013 and I got my notice in January. At the time, I thought it was just me. I didn’t really say it to anyone. In retrospect I felt an awful lot of shame about it and didn’t tell my friends and family about it for a week or two.

“It’s a two bedroom apartment. I’m beyond lucky with it and my neighbours. It’s a lovely little place to live.

“When I explained the situation to my mam, she said to me ‘right, you’re coming home’. I said ‘if that’s okay’, and she gave me a weird look, but I haven’t lived there since I was in my early twenties.

“I have a big extended family and a great network of friends. People offered me a bedroom here and a couch there, but I’m one of the lucky ones. A lot of the others don’t have that support. Their support network is here and that’s what’s being eradicated.”

Mr Healy said the group was “digging into” who the owner of the building is, but that rent is paid to McPeake Auctioneers. “It’s not as simple as you would imagine,” he said.

‘We are very stressed’

Natalia Szwedo, who is from Poland, has lived in the Republic since 2007 and in Exchange Hall since 2011. Her husband is a night janitor in Tallaght Hospital. “It’s very convenient for us here, and my kids are in school nearby,” she said.

“They’re aged six and three. They’re very happy here and have loads of friends. They’re not aware of what’s going on because I don’t want to worry them. I’m trying to keep things as normal as possible for them, even though we are very stressed.

“I got an eviction notice on February 28th telling me I have to move out by October 10th. I don’t know what to do. There are no apartments to let in Tallaght and I don’t want to move anywhere else.”

Cherie Ellorig, who is Filipino, moved to the Republic in 2001 and has been working as a nurse in Tallaght Hospital since then. She moved into Exchange Hall in 2005. “My kids have grown up here and go to school in Tallaght, so it’s really handy for us,” she said.

“I got my notice in the first week of March and it was so shocking. For weeks after I got the letter I was so stressed. I can’t concentrate on my work. I can’t eat or sleep. I’ve lost nearly 3kg in the last couple of weeks. My husband is the same. It’s really affected us.”