‘We hate Catholics’ chant ‘not reflective’ of Northern Ireland fans 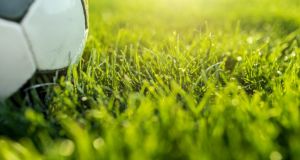 The PSNI said on Wednesday it is carrying out inquiries into the 20 second video which is believed to have been filmed in a bar in Belfast. Photograph: iStock

The behaviour of some people singing anti-Catholic songs was totally uncharacteristic of where Northern Ireland football is at the moment, the head of the North’s fan club said on Wednesday.

The PSNI said on Wednesday it is carrying out inquiries into the 20 second video which is believed to have been filmed in a bar in Belfast on Sunday when Northern Ireland enjoyed a 2-1 victory over Belarus in a European Championship qualifier.

A number of those in the clip, some wearing Northern Ireland jerseys, are heard singing “we hate Catholics, we hate Roman Catholics” to the tune of Tiffany’s “I Think We’re Alone Now”.

Killen Rangers football club in Co Tyrone, some of whose members are believed to be engaging in the singing, condemned the sectarian incident while the Irish Football Association (IFA) also deplored the video.

Killen is a predominantly unionist village about three miles from Castlederg. One local republican source expressed some surprise at the incident, saying that the club and its supporters did not have a sectarian reputation.

He said that in recent years a number of nationalists had started playing for Killen Rangers which was formed in 1982. “It seems to have embraced both sides of the community and what those individuals have done I don’t think they represent Killen football club,” he said. The source added that any club’s supporters “all can’t be micro-managed”.

Mr McAllister, who is chairman of the Amalgamation of Official Northern Ireland Supporters’ Clubs, said the video showed “behaviour which is unacceptable and certainly isn’t reflective of Northern Ireland fans and how they behave”.

He acknowledged that a generation ago that the home ground of Windsor Park in south Belfast could be a very unwelcoming place for people from a Catholic or nationalist background but said that the long-running IFA Football for All policy together with the work of his organisation had radically improved the situation.

“We have been recognised for the work we have done to improve the atmosphere at Windsor Park to make it more welcoming; It is a world away from where we were 25-30 years ago,” he said.

Mr McAllister said this was also reflected in how Northern Ireland and Republic fans won good conduct awards both from the mayor of Paris and from EUFA for their behaviour during the European Championships in France in 2016.

“I think the fact that the a small number of people misbehaving in a bar away from the stadium has made the news demonstrates how out of place that behaviour is in the eyes of many people,” he said.

Mr McAllister said it would be for the IFA to decide whether these fans should be banned from future Northern Ireland games but “we feel if the IFA can identify those involved they should take appropriate action”.

The IFA said “if those involved can be identified the association will work to ensure that they are prevented from getting tickets for Northern Ireland matches”.

Killen Rangers FC issued a strong apology for the behaviour of some of its members. It said the footage was “despicable”.

“Those who know us or who have had any dealings with our club will be aware that we have been doing everything in our power for the best part of a decade now to make our club more attractive to all sides of the local community,” it said in a statement.

“As a club we wish to unreservedly apologise to the Catholic community for the obvious offence caused, and again emphasise that this incident goes completely against the ethos of our club,” it said.

The club added, “We will meet and address this matter in line with our club policies and constitution. If disciplinary action is deemed appropriate then the necessary sanctions will be taken without hesitation.”

Sinn Féin, the SDLP and Alliance condemned the video. Sinn Féin Assembly Sinead Ennis welcomed the IFA statement but said “the silence from unionist political figures would suggest they are once again being very selective in what they find outrageous or offensive”.

“All hate is wrong. All sectarianism and bigotry of any kind is wrong. It needs to be called out and condemned wherever and whenever it manifests itself,” she said.

1 Woman stranded in Ireland due to pandemic has ‘miracle baby’
2 Transmission of Covid-19 on flight into Ireland linked to 59 infections
3 US election: ‘Donald Trump needs to go. White America got what they want’
4 Australia demands answers after women taken from Qatar Airways flight and strip-searched
5 Covid-19: Public urged to ‘stay at home’ as 1,025 further cases confirmed in State
Real news has value SUBSCRIBE