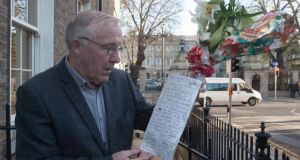 Dublin’s Lord Mayor Christy Burke has reaffirmed the city council’s commitment to providing emergency shelter for the homeless, saying that the majority of beds should be made available “within the next seven days”.

Mr Burke spent a number of hours on Thursday night doing charitable rounds for homeless people in Dublin city with Taoiseach Enda Kenny. Mr Kenny said some people’s sleeping situations are “something we should be ashamed of”.

Speaking prior to the launch of the Depaul charity’s three-year strategy to tackle homelessness, Mr Burke said: “If they [the beds] weren’t going to be delivered, I wouldn’t be speaking to you this morning. If I thought this was all in vain, the meeting and the commitment from the Minister, from all of us, I wouldn’t have stayed and continued with the Minister yesterday.”

According to Mr Burke, Dublin City Council plans to open 123 beds for those in need of shelter by December 15th, with Catholic organisations set to offer a further 50 beds.

The Lord Mayor said the Taoiseach was “taken aback” by the plight suffered by the capital’s homeless inhabitants.

“He was with me from 10.50pm until 2.30am… He had his woolly hat on, and his jacket on and his scarf, and he walked around and he fed people and he listened to people,” said Mr Burke, who detailed the pair’s encounters with former models, architects and train drivers from throughout the country and beyond who are currently sleeping rough on Dublin’s streets.

Speaking in Armagh, where he was attending a meeting of the North-South Ministerial Council, Mr Kenny said “tea and sympathy” will not solve the homeless crisis.

“Tea and sympathy takes nobody off the streets,” he said. “What I saw last night was a revelation and, believe me, it’s quite a sobering thought, and not just a thought, an openness and a frankness to meet people on the streets for variety of reasons.

“There were 23 people, there were six or seven who were in a position to be well able to maintain accommodation; a room in a hostel or an apartment. There are a number of others whose complications are very difficult, very difficult, I have to say. Sleeping in the midst of a mass of needles in the gutter in 2014 is something we cannot condone; (it is) something we should be ashamed of. And tea and sympathy is not going to sort that out.”

Speaking to The Irish Times ahead of the launch of the organisation’s “Why Not” plan, Depaul CEO Kerry Anthony urged the Government not to lose sight of long-term strategies to tackle homelessness in light of its target to resolve the issue by 2016.

“We won’t get everything sorted by 2016. The amount of housing that we need built is not going to be built by 2016, what we need to do is keep on track, have a plan in place and know how and when we’re going to deliver on the levels and numbers of social housing that are needed,” she said.

She was also keen to echo the Lord Mayor’s sentiments on the changing face of homelessness in Ireland due to the austere economic circumstances of recent years.

“What we’ve seen, particularly in the last two years, has been a lot more families presenting as homeless- people who don’t have addiction issues, people who are failing to pay their rent,” said Mrs Anthony.

She also outlined the complexities that accompany calls for more rent controls.

“Some of the organisations would be saying that there are rent controls that need to be brought into place.

“I think if we don’t do something about this, we might find that people who have low-income jobs are finding themselves in a situation where they’re presenting as homeless, so it’s definitely something that needs to be addressed,” she said.