Who is Dr Nooh al-Kaddo, chief executive of Islamic Centre? 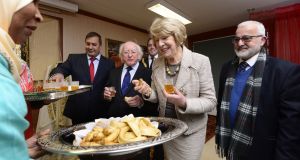 President Micheal D Higgins and his wife Sabina at the exhibition in the Islamic Cultural Centre in Clonskeagh yesterday at the opening of exhibitions for Neighbourhood Week with Dr Nooh Al-Kaddo, right. Photograph: Cyril Byrne

Dr Nooh Edreeb al-Kaddo (65) was born in Mosul, Iraq, in January 1953. He has an MBA and a PhD in public administration from the University of Liverpool. In the UK he was involved as a management consultant and trainer in the human resources development section of the London office of the International Institute of Islamic Thought.

He is believed to have lived in the UK for 17 years before moving to Ireland from Liverpool in 1997 to take up work at the Islamic Cultural Centre of Ireland (ICCI) in Dublin’s Clonskeagh.

He is currently chief executive there and a director of the Al Maktoum Foundation Ireland.

He is also believed involved with many charities in Europe including the Human Relief Foundation and Human Appeal International while also being secretary of the Essalam Islamic Cultural Centre in Rotterdam.

He has also been associated with groups that are part of the international network of charities known as the Union of Good headed by Sheikh Yusuf al-Qaradawi who, too, has denied membership of the Muslim Brotherhood.

In 2008, the Irish Naturalisation and Immigration Service refused to approve an entry visa for Sheikh al-Qaradawi, also head of the European Council of Fatwa and Research (ECFR), a private Islamic foundation whose headquarters is at the ICCI in Dublin.

Dr al-Kaddo has confirmed Sheikh al-Qaradawi’s ECFR foundation had its headquarters at the ICCI. He has described the Sheikh as “widely respected” and a “learned scholar” whose views were “representative of Islamic teachings and are not assumed to be a violation of same”.

Dr al-Kaddo has also said the ICCI was “aware that on occasion there are claims it does not take a sufficiently strong stance against global extremism,” he said. “The ICCI has, on all occasions of extreme violence carried out against innocents, condemned it, especially when the perpetrators claim it to be in the name of Islam,” he said.

In February 2011, following the Egyptian revolution, Sheikh al-Qaradawi made his first public appearance in that country since 1981 when he addressed a crowd estimated at two million in Tahrir Square at Friday prayers.

He called for the restoration of civilian rule, support for democracy and elections, and the establishment of a committee for changing the constitution. He also called for the release of political prisoners in Egypt and praised the country’s Christian Copts for protecting Muslims.

On the Palestinian issue he prayed for the re-conquest of Jerusalem by Muslims so that he and others could pray in peace at the Al-Aqsa Mosque there. Later that February he issued a fatwa permitting the killing of Muammar Gaddafi in Libya.