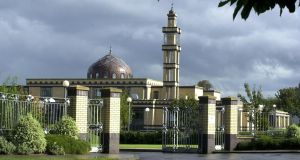 The Islamic Cultural Centre in Clonskeagh, Dublin. Auditors have repeatedly pointed out that the making of cash loans to staff which are not recorded by the centre’s payroll section raised taxation issues. Photograph: Cyril Byrne

The Islamic Cultural Centre in Dublin has been repeatedly criticised by its auditors for its treatment of charitable cash donations and money received under Islamic rules, documents seen by The Irish Times show.

The auditors of the Al Maktoum Foundation, the company that runs the centre, have expressed concern over a period of years that the cash is not being properly recorded and is being held at the centre rather than banked.

Deloitte has also raised concerns about payments made using the cash not being adequately recorded, and over the tracking of money loaned to staff and people in receipt of welfare payments.

The Irish Times has seen “management letters” or auditors’ letters to the management at the centre from 2009 and 2014. They show the same concerns being expressed year after year, despite many of the identified flaws being described as having a high level of importance. A spokesman for Deloitte said it did not wish to comment.

Management letters are letters produced by auditors at the end of each year’s audit and identify issues that need to be addressed before the accounts can be given the approval of the auditors. The accounts of the Al Maktoum Foundation were signed off by the auditors for the years in question, indicating that the issues identified were resolved or considered not material.

The 2014 management letter, which was written in June 2015, refers to the holding of cash donations rather than their lodgement in the bank and says that this practice “must be discontinued with immediate effect . . . Such income under no circumstances should be used to defray other expenses.”

In its 2009 management letter, Deloitte said it was “imperative that all income is recorded in the books of the company” and that cash was not used to fund staff and welfare loans.

In the 2011 letter, the auditors expressed concern that “supporting documentation was not available for a large portion of expenditure based on our audit sample.”

The auditors also expressed concern that some of the cash loans given to staff and people who attend the centre had been subsequently written off. They have repeatedly pointed out that the making of cash loans to staff which are not recorded by the centre’s payroll section raised taxation issues.

The Al Maktoum Foundation is an Irish-registered company with charitable status which is in turn funded by large annual grants from the ruling family of the United Arab Emirates. It funds the Islamic Cultural Centre in Clonskeagh, Co Dublin.

The centre was also repeatedly criticised over how it managed both loans to staff and welfare loans, the latter being loans to people who attend the centre and might be in financial difficulty

The most recent accounts filed by the foundation are for 2016 and show an income of €2.7 million, with all but €142,686 being spent by the end of the year. The largest item of expenditure was salaries and related costs, which totalled €1.4 million.

The Deloitte management letters show that the centre rents property to the operators of a shop, canteen, barber shop and creche, and that how this income has been treated has also been a source of concern to the auditors.

There was also concern expressed about potential tax issues to do with how the centre treated people providing cleaning and maintenance services on a contractor basis. The auditors questioned whether these people might not in fact qualify as staff, raising tax implications.

The centre was also repeatedly criticised over how it managed both loans to staff and welfare loans, the latter being loans to people who attend the centre and might be in financial difficulty.

The payment of staff loans other than through the payroll system raised benefit-in-kind tax issues. Some staff loans had been written off, the auditors noted. As with staff loans, the welfare loans were sometimes paid in cash and inadequately documented and reconciled in the accounts.

The donations received by the Clonskeagh centre include Zakat, which is a type of religious tax or obligatory alms; Sadaqa, which is a voluntary donation; and Fidyah, which is a contribution made when a person misses a fast, perhaps during Ramadan, as well as donations for Gaza and Iraq. The amounts involved total tens of thousands of euro annually.

Other items raised in the management letters include a company car being used by a third party, income of €150,000 from Rotterdam not having backup documentation, and failure to properly record credit-card expenditure associated with the European Council for Fatwa and Research, which is based in the Clonskeagh centre.

The chief executive of the centre, Dr Nooh Al-Kaddo, responded to an extensive list of questions from The Irish Times based on the management letters.

He said the centre provides loans because of Islam’s rules on usury, or interest on loans, and that this is especially the case when loans are being issued to fund religious rituals such as the pilgrimage to Mecca (the Hajj). The loans issued were usually “a couple of thousand euro” and all the associated documentation is supplied to Deloitte.

“Staff loans are no longer facilitated by the centre,” he said.

Dr Al-Kadoo said that no loans are paid in cash. They are paid by cheque or electronic transfer. It is not clear how this statement can be reconciled with the repeated statements to the contrary in the management letters.

He said cash received is supposed to be “banked immediately” and counterfoils kept to identify where the money came from, and that cash not banked immediately is “never left unattended and is kept in a secure place”.

He said the decision to appoint his daughter-in-law was made by the board of directors, of which he is not a member

In relation to the concerns highlighted by the auditors in relation to the documentation of expenditure , he said that the centre has a clear procurement procedure covering the management and control of all non-pay expenditure. He said it was rare and exceptional for rent to be paid in cash and that rental income “just like any other income is always declared and posted.”

Dr Al-Kadoo said payments to contractors are based on monthly invoices and “no cash payments are involved”. Cash payments to pay for travel and food are sometimes paid to volunteers but the amounts involved are “quite tiny and insignificant compared to the size of the organisation.”

In relation to the centre in Rotterdam, he said it was funded by Dubai with the money for it going to Dubai via the centre in Dublin, and that usually more money than is budgeted for is transferred to Rotterdam from Dublin.

In their 2013 letter the auditors expressed concern about the treatment of a car bought that year. Dr Al-Kaddo said the car was to be used by him and others but as he was the main user, the auditors raised concerns about a possible benefit-in-kind issue.

“The car was sold to me in 2016,” he said, following a written, third party valuation and a cheque for €23,000 was paid to the centre by him. This is recorded in the company accounts, he said.

Dr Al-Kaddo is the company secretary of the Al Maktoum Foundation with four of the company’s six directors being based in the United Arab Emirates. The two Irish directors are Abdel Basset Elsayed, with an address in Co Meath, and Noor Al-Ramadhani, who was appointed in April 2016 and is a daughter-in-law of Dr Al-Kaddo.

He said the decision to appoint his daughter-in-law was made by the board of directors, of which he is not a member.

Dr Al-Kaddo and his daughter-in-law are the sole directors of Edenbourg Ltd, with an address in Barrow Street, Dublin. It is a property company with fixed assets worth €6.3 million and creditors owed a similar amount. The property is understood to be the centre in Clonskeagh.

The directors are not paid and the company’s shares are held by Mirza Al Sayegh, head of investments affairs for Hamdan bin Rashid Al Maktoum, the crown prince of Dubai. The company owns property which is rented for a nominal rent and the ultimate owner of the property is the department of endowments and Islamic affairs in Dubai.

Dr Al-Kaddo’s son, Ibrahim, is the founder of Manasik Tours, established in 2005 and one of two Irish travel agents licensed by the kingdom of Saudi Arabia to conduct Hajj pilgrimages, some of which are paid for by the Clonskeagh centre. Dr Al-Kaddo said the Clonskeagh centre at one stage considered applying for a licence but was advised not to get directly involved. Ever since 2005, he said, the centre has sponsored a few people each year to go on the pilgrimage (six in 2017) and this is paid with funds sourced from Dubai but paid via the Clonskeagh centre to Manasik Tours on behalf of the people selected.

“The reason why we deal with Manasik Tours, in addition to it being local and providing competitive rates, is because it is Ireland’s largest Hajj and Mura agent, and being officially accredited by the ministry of Hajj means that they issue their own visa and that their pilgrims are fully supported and protected by the ministry for Hajj in Saudi Arabia.” Mura is a non-mandatory pilgrimage to Mecca that can be taken at any time of the year.

Manasik, Dr Al-Kaddo said, “is one of only two Hajj-licensed Irish travel agents and it happens to be owned by my son”.

The centre has also used cleaning services supplied by a company operated by another of Dr Al-Kaddo’s sons, Khalil. Dr Al-Kaddo said this had been for a very short period of time around 2012 and had not happened since. The services were provided at a “very competitive price,” he said.