Any Irish abortion regime will have restrictions, says Varadkar 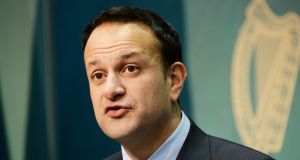 Taoiseach Leo Varadkar said a Yes vote in the abortion referendum would end the absolute Constitutional ban on abortion and allow the Dáil to legislate. Photograph: Cyril Byrne/The Irish Times

If the Eighth Amendment is repealed, any legislation introduced that provides for terminations will not mean unrestricted access to abortion in Ireland, Taoiseach Leo Vardakar has said.

Mr Varadkar said one key difference in the legislative proposals being published on Friday from what was proposed by the Oireachtas Committee on the Eighth Amendment was the restrictions.

“We’re not proposing that there be no restrictions at all. It’s not a case of someone going into a pharmacy and picking up an abortion pill the way you might buy something over the counter. It’s not going to be like that,” the Taoiseach told the Pat Kenny Show on Newstalk on Friday.

“Somebody who wants to have an abortion in the early weeks of pregnancy will go to their doctor, someone who is trained to understand the risks, give them proper counselling about it, also talk to them about alternative options.”

“So, not only is it not without restrictions, it’s also going to be a lot safer. What’s happening at the moment is people are buying these pills over the internet. They’re taking them at home, they haven’t had advice from a doctor, they haven’t been told about other options, other than terminating a pregnancy.

“There’s a real risk in that because you may have an ectopic pregnancy and you take that pill and not only does it not work [but] it could put you at further risk in the future.”

Mr Varadkar said another provision being considered for the legislation was for a short waiting time before an abortion.

He also said the draft legislation, which will be produced by the end of the month, would be written in plain English and not in complicated legal terms.

Mr Varadkar stressed the overall proposals on a future abortion regime in the event of the Eighth Amendment being repealed were not coming from the current, minority Government but were based on recommendations made by the cross-party committee.

He said the Government felt it was better to give people an indication of the likely legislation ahead of the referendum.

“The obvious question that people ask is if we do change the Constitution ‘what effect will that have in practice, what law will you introduce after’?”

“What [the committee] are saying is that we should have a new law. What’s at the heart of that new law is the view that we should trust women and trust doctors, trust women in the early weeks of a pregnancy, the first 12 weeks, to decide for themselves if they want to continue with that pregnancy. After that, [to] trust doctors to decide in those exceptional circumstances where it may be needed for medical reasons.”

Mr Varadkar said while it was important to make clear to people the likely shape of any future legislation on abortion, this would only happen if people decide they wanted change and passed the referendum , adding that he was making no assumptions that the referendum would pass.

The Taoiseach said while all Ministers were committed to a Yes vote, there were different views around the Cabinet table and he welcomed that fact.

Mr Varadkar said he wanted Fine Gael to be a “warm house for people who have different views on this issue and those different views probably exist around every dinner table, in every family in Ireland. I want us to be able to discuss them. I want the debate to be respectful. I want to make sure it never gets personalised.”

“I think we have to go out there and advocate for change. What we have now in our Constitution is an effective ban on abortion in any circumstances other than where the woman might die.

“If we’ve a Yes vote that allows us to change that law to liberalise that to allow abortion in certain circumstances.

“If there’s a No vote then we’re going to have the existing law where even a young girl who is raped cannot end her pregnancy and anyone who helps her could be sent to jail for 14 years.”

Mr Varadkar said rape and incest will not feature in the legislation. He said that was part of the reason why the committee formed the opinion that the best way to deal with these cases was by allowing a woman to make the decision up to 12 weeks.

Asked about a hypothetical scenario where a 12-year-old is raped by her father and finds out she is pregnant at 16 weeks, Mr Varadkar said this would be one of those cases of “trusting doctors - two doctors in that case, considering the impact that could have on the physical and mental health of the young women. It would be a decision made by her and her doctors.”

Mr Varadkar said it would not be practical to use the courts to determine if a pregnancy was the result of rape but that some process was required.

“You couldn’t use the courts but you still have to have some sort of process. I think you would be revictimising women to ask them to come in to maybe a panel - garda, doctor, I think that would revictimise women. That’s one of the reasons why the all party committee said that in the first couple of weeks this should be a decision for the woman.”

“The obvious question that people ask is if we do change the Constitution what effect will that have in practice, what law will you introduce after?”

He said a Yes vote would end the absolute Constitutional ban on abortion and empower the Dáil to “decide our law based on what is right and what the views of the Irish people are”.

“That is what happens in other countries. Take for example in the UK, Germany, the Netherlands these laws are made by parliament and parliament reflects the views of the public.

“People looking for a No vote they’re saying, ‘if you repeal the eighth amendment you can’t trust the politicians, they might go much further than the public wants’.”

“But look at Northern Ireland. Northern Ireland doesn’t have a constitutional ban on abortion yet the politicians there, when they’re able to function in Stormont, have actually not liberalised the laws there.”