Syrian refugee presents violin he made to Michael D Higgins

‘He hugged me so strong, he was so warm and sweet,’ Almuthna Loulah says of President 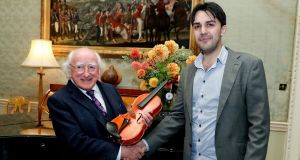 A Syrian refugee who made a violin from scratch after arriving in Ireland last March has presented the instrument to President Michael D Higgins at Áras an Uachtaráin.

Almuthna Loulah, who lives in a refugee reception centre in Ballaghaderreen, Co Roscommon, said he wanted to donate his work as a gesture of thanks to the people of Ireland.

Mr Lennon is a fiddle player with Irish band Stockton’s Wing and he played The West’s Awake on Mr Loulah’s violin for the President during the visit to the Áras.

Ms Beirne said it was a “poignant” choice given Galway’s victory in the All-Ireland Hurling Final at the weekend.

Mr Loulah and Mr Higgins discussed the process of making the violin and how Mr Loulah believed it carried the “soul” of all of the people who signed the inside of the instrument.

“The President was struck by the quality of the violin and the wonderful sound it produced,” a spokesperson for Áras an Uachtaráin said.

Mr Loulah said Mr Higgins was “such a nice man” who asked about his studies and advised him to make more violins in the future.

“He hugged me so strong, he was so warm and sweet, it was not like an official hug,” he said. “He is like a father to all Irish people.”

Following Monday’s meeting, the violin has now been loaned to the RTÉ Concert Orchestra. It will be played on RTÉ’s Arena programme as part of Culture Night on September 22nd.

Mr Loulah last month told The Irish Times that his life was a “miracle” after Co Mayo man Dave Teehan, a long-time violin maker, donated his workshop to him after developing an allergy to the wood used in the process.

“He shocked me. Before that I thought maybe if I can just get one chisel, or two maybe, but then he said you can take all of this. It was such a big generosity,” Mr Loulah said.

A documentary about Mr Loulah’s story and the refugee reception centre in Ballaghaderreen will be aired on RTÉ’s Nationwide on Wednesday and Friday evening.