‘You were always in the clutches of the nuns’

About 40 people calling for a memorial to survivors of the Magdalene laundries gather outside the old Gloucester Street laundry on Sean McDermott Street, Dublin. 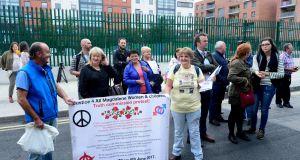 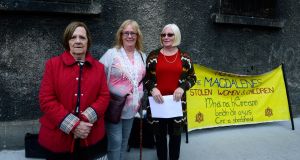 Pictured outside the former Magdalene laundry on Sean McDermott Street are, from left Mary Merritt, Angela Merrigan (on behalf of her mother Mary) and Lindsay Rehn. Photograph: Cyril Byrne

At protest in Dublin on Friday, where she was one of about 40 people calling for a memorial to survivors of the Magdalene laundries, Ms Meritt also said, during her 14 years in the laundry she was given neither pads when she was having her period, nor a toothbrush.

“When we were having our period we just had to get on with it,” she said. “When I came out of the laundry I had to have all my teeth out they were so rotten. And I was blind in one eye.”

The protest, outside the old Gloucester Street laundry on Sean McDermott Street, heard from several survivors, as well as Orla O’Connor, chief executive of the National Women’s Council of Ireland (NWCI) and local councillor Gary Gannon of the Social Democrats. The laundry at that site was the last to close, in 1996.

More than 10,000 women and girls spent time in Catholic Church-run Magdalene laundries from the early 20th century, until 1996. Many were sent for the “crime” of being unmarried and pregnant, and they worked without pay in the laundries which supplied services to State-run bodies, hospitals and hotels.

The State has consistently rejected any liability for the treatment of women and girls in the Magdalene laundries. Repeated calls from the United Nations, the NWCI, Amnesty International and campaigners such as the Justice For Magdalenes Research Group, for an independent investigation into what happened in the laundries and the systems around them, have been rejected by Government.

An inter-departmental committee, chaired by former senator Martin McAleese, reported on the matter in 2013 but its findings have been criticised by survivors.

Ms Merritt said she had been placed in an industrial school in Galway by the courts, aged two, as her mother was “destitute”. Aged 17, she was transferred to High Park laundry where she says she wore a uniform of a long, grey serge dress, a white cap and white apron, but no underwear.

“In the morning we got porridge, for dinner cabbage, potatoes and bit of fish and at 7pm we got a small cup of cocoa, and then we had to go and pray for two hours. We were hungry all the time,” she said.

“I’ll never forget the heat and the noise. If you were sick or had a headache you never got a break or any help. There wasn’t time to be depressed. You were always in the clutches of nuns.”

Sheila O’Byrne (60) spent a year in St Patrick’s mother and baby home, where she had a baby boy taken from her in 1976. She said as long as she lived she would fight for justice.

“We were treated like dirt. Our names were changed... I stood up for many a woman in there and I took many a hiding, and they tried to drown me in the bath but, by God, I got back and I pulled her in.

“I knew a little one who was 12 years of age... She was expecting twins...It wasn’t until last March I heard her name being called out at a memorial in Glasnevin cemetery. It nearly killed me to hear her name.”