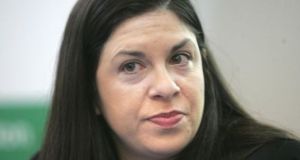 Tanya Ward, chief executive of the Children’s Rights Alliance, called on the State to relocate young people who are risk of ‘losing their childhoods’ as a matter of urgency. Photograph: Dara Mac Dónaill

The Government has a “moral duty” to meet its commitment of bringing 36 refugee children to Ireland from Greece as soon as possible, the head of the Children’s Rights Alliance has said.

Tanya Ward, chief executive of the alliance, called on the State to relocate young people who are risk of “losing their childhoods” as a matter of urgency, warning that 500 unaccompanied minors are currently living without shelter or access to education in Greece.

Children on the island of Lesbos, where a 15-year-old Afghan was killed in the Moria refugee camp in August, are at particular risk, she said. “It’s a deteriorating situation; Ireland needs to move quickly to get those refugee children out.”

Minister for Justice Charlie Flanagan committed in December 2018 to welcome an additional 36 unaccompanied minors into Ireland this year. Some 41 children and young people have been brought to Ireland through the Calais special project as part of the Irish Refugee Protection Programme (IRPP) which made a commitment four years ago to accept up to 4,000 people. A total of 2,555 people had arrived through the programme by July 2019.

Ms Ward said she understood that nine children in Greece had been interviewed for relocation but expressed concern that the Government was nowhere near bringing 36 young people to Ireland by the end of the year.

Speaking following the launch of the Children’s Rights Alliance Safe Haven report, which examines the difficulties refugee children from Syria have encountered since moving to Ireland, Ms Ward also called for the establishment of more State owned reception centres to house asylum seekers and refugees upon arrival in the country.

“If we’re going to play a role here we have to start building alternative accommodation, we can’t just rely on private contractors. The private market has failed to deal with refugee accommodation so the time has come to start looking at State investment. This accommodation could also be used for other groups of vulnerable people, it wouldn’t necessarily just be for refugees and migrants.”

Chair of the IRPP Eibhlin Byrne told attendees at the Safe Haven report launch that additional efforts should be made to ensure children coming to Ireland receive adequate supports including access to additional language classes and youth work initiatives.

Most of their parents have “written off their own lives” in their attempt to build a better future for their offspring, she said, adding that with the right support and guidance, these children could go on to become future business, cultural and political leaders in our country.

Labour party TD Joan Burton, who was serving as Tánaiste when the IRPP was established in 2015, criticised the Government for failing to meet its initial target of welcoming 4,000 people, which included a commitment to accept 200 unaccompanied minors into the country.

Dr Muireann Ní Raghallaigh, one of the authors of the Safe Haven report, said she believed Government assertions that only 41 young people wanted to come to Ireland from Calais.

She added that Tusla was currently investigating the possibility of relocating young people from Italy.

Ms Byrne said “very significant efforts” had been made to trace any young person who wanted to come to Ireland and that she expected the number of adults and children arriving under the programme to rise in the coming months.