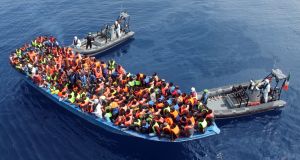 The Government should launch a new Mediterranean search-and-rescue mission and commit to accepting an additional 1,500 refugees per annum over the next three years, Irish NGOs have said.

The Irish Refugee and Migrant Coalition, which represents 23 organisations, has called on the State to offer more protection to families, children and individuals forcibly displaced from their homes ahead of the September deadline on announcing how many resettlement places the country will allow over the next two years.

The coalition warned that 1.44 million people would be in need of resettlement by 2020 and that a “significantly enhanced and adequately resourced” programme was needed so that Ireland could accept its fair share of refugees.

The Jesuit Refugee Service of Ireland, a member of the coalition, said the State needed to accept an additional 1,500 people per year from 2020 to 2022 in order to meet the UN’s global resettlement needs. The Irish Refugee Council added that new Irish-led search-and-rescue missions should be launched to bring more people to Ireland.

“The change in government in Italy and the fact that Operation Sophia is up for review at the end of September is a real opportunity for Ireland to lead in both a new, State-led search-and-rescue mission and a mechanism for sharing responsibility,” said the council’s Nick Henderson. “The Irish navy has rescued more than 18,000 people over 11 missions and has a strong role to play.”

Additional spaces should also be made for people arriving in Ireland through community sponsorship and humanitarian admission programmes, said Fiona Finn, chief executive of Nasc, Migrant and Refugee Rights.

“Over 900 people have drowned attempting to cross the Mediterranean this year alone,” she said. “It is of the utmost importance that we provide safe and legal pathways for refugees fleeing persecution so that no one is forced to make the choice to put their child in a boat.”

Some 2,555 people have come since 2015 as part of the Irish Refugee Protection Programme. The Government originally pledged to accept up to 4,000 people through two separate strands – the relocation of people from Greece and the resettlement of people from Lebanon and Jordan. To date, 1,022 people have arrived under relocation and 1,335 through resettlement. An additional 41 unaccompanied minors have come from Calais, 99 people have arrived through the recent humanitarian admission programme and 58 have been accepted from search-and-rescue missions.

The Department of Justice announced in July that it would relocate up to 100 asylum seekers by the end of 2019. However, it is still 1,445 people short of its original commitment made in September 2015.