‘It was really inappropriate flirting, creepy. But ... I didn’t want to get on his wrong side’ 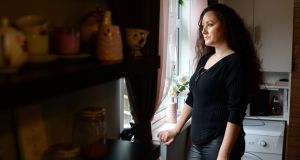 Kirsty-Cyane McGill kept all the texts to eventually ‘do something about it’. Photograph: Dara MacDonaill/The Irish Times

A mother who feels she was sexually harassed by an estate agent says she was unable to ask him to stop for fear of becoming homeless.

Kirsty-Cyane McGill (33) has two children (15 and 10) but no longer lives in the property. She had rented it for a year until September 2017; the letting agent is based in Co Dublin.

In the summer of 2016 she was at risk of homelessness as her then landlord was selling up when she first met the agent. She was eligible for the Housing Assistance Payment, had spent 10 months searching for a home months and was “getting desperate”.

She went to see a house he was showing. “The agent was very nice, said if I wanted the house I could have it. I was a bit taken back but obviously I was delighted. As a single mother you don’t usually get a look in.”

She shows texts from him a few days later, before she arrived at the house to sign the lease. “I’m here Kirsty!. Dinner on, table set and wine chilling. How’s that?”

She replied: “Is there four plates? Kids can’t wait”. To which he replied: “I’m blowing out the candles” with emojis of glasses of red wine, red roses and a woman dancing. He suggested they go to the seafront sometime to celebrate with a drink .

“I thought it was really inappropriate flirting, creepy. But I just tried to laugh it off. I didn’t want to get on his wrong side,” says Ms McGill.

After moving in, he had to drop into her and en route texted: “Your turn to have the dinner ready”. To which she replied with a laughing emoji.

About a month into the tenancy she contacted him about a plumber who had repaired the heating and had been rude but then apologised. He replied that the plumber must have “melted” when he met her.

“And he just kept calling to the house for strange reasons, standing for ages against the counter. To be honest I was terrified if I got his bad side, we could end up homeless. I just felt if I said, ‘you’re being inappropriate’ where was that going to land me? He could just kick me out; I felt really vulnerable.”

During this time her boyfriend –- who lived elsewhere – died suddenly. Delays with her Housing Assistance Payment led to overdue rent and relations with the agent soured. She found alternative housing in October 2017 and has rented there since.

I know how vulnerable I felt with two kids

She kept all the texts to eventually “do something about it”. She contacted Ruth Coppinger TD (Solidarity) after she revealed last week texts a young woman received from a landlord propositioning sex in lieu of rent.

“I wanted to say that that’s not just a once-off. I know how vulnerable I felt with two kids and feeling I could be threatened with homeless if I didn’t go along with all the inappropriate, creepy flirting.”

Ms Coppinger is receiving “more and more disclosures about . . . landlord sexual exploitation in the rental sector”. She says that women in receipt of the Homeless Assistance Payment are “particularly vulnerable”.

A spokeswoman for the Residential Tenancies Board (RTB) said: “If a tenant feels threatened by a landlord or their authorised agent, verbally or via emails or text, and it is interfering with the peaceful enjoyment of their tenancy, a case can be taken to the RTB citing breach of landlord obligations.”

In the case of a letting agent, a tenant can bring a complaint to the Property Services Regulatory Authority for investigation. Both bodies said any case of sexual harassment by a landlord or agent should be reported to the gardaí.

The agent in this case, when contacted by The Irish Times, did not comment.