Five workers, given an hour’s notice of redundancy, fight to save jobs and centre 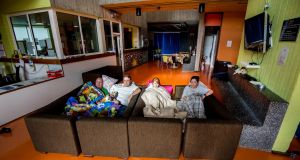 Centre attendants at Brookfield Youth and Community Centre, Tallaght, Christy Donovan, Kieran Walsh, Gemma O’Reilly and Nicola Nagle, who have been sleeping at the centre since its sudden closure. Photograph: Brenda Fitzsimons

Former workers at a youth centre in one of the most disadvantaged areas of the State say they will “sit in” until their jobs are guaranteed and are calling on South Dublin County Council to “step in and save the centre”.

Brookfield Youth and Community Centre in west Tallaght closed suddenly on last Friday, after its employees were told at 3.30pm they were being made redundant in an hour.

The building is owned by the council, which had run it from 2008 until 2010 before outsourcing it to a not-for-profit company, BYCC Ltd. It was then managed by a board.

An estimated 1,000 children and young people, and their parents, from the surrounding Glenshane, Rossfield, Fettercairn and Brookview areas, used the facility’s dance studio, pool and snooker tables, computers, cafe, and arts and music rooms, all of which were open seven days a week.

Last Friday at 3.30pm, the then chairman of the board, David Hoare, told former staff – Kieran Walsh, Christopher Donovan, Gemma O’Reilly, Karen Flanagan and Nicola Nagle – the centre was closing within an hour. They were offered four weeks’ pay in lieu of notice, said Mr Hoare.

He said it had made him “physically sick” to close the centre, saying he had been involved “from the very beginning” in getting it built and opened.

He said a number of people had resigned and retired from the board over the past year, none of whom had been replaced due to a background legal issue. “It just wasn’t feasible, or legal, for me to keep running the place as the sole member of the board. So I had to tell the workers we were ceasing trading with immediate effect. I’m hoping South Dublin County Council can step in a find a solution. It is a terrible loss to the area if those services go.”

Mr Walsh and his former colleagues, who have been sleeping on couches and blow-up beds in the building for almost a week, say they cannot leave the building.

“If we leave and the council changes the locks, we will just be forgotten about. This is where we work, this is our centre, too, and we have to be part of any solution.”

As local schools closed on Thursday, children came to the centre on to see if there was any news. Erica Pajet (11), from Fettercairn, was “very sad” it had closed. “We used it for just going to chill out, play games and do homework. My little cousin did Irish dancing there and she can’t do it any more.”

The Government, in its strategy Better Outcomes Brighter Futures 2014-2020, commits to tackling child poverty and said it would “support youth organisations to provide safe, supportive, and developmental opportunities for young people ... within the community.”

A council spokeswoman said the council was “anxious to secure first and foremost the physical structure of the building and ensure its security and status are maintained. In addition South Dublin County Council is committed to ensuring that a proper community resource replaces the services previously provided by the company.”