‘Largest benefits flow to those on the highest incomes,’ says group 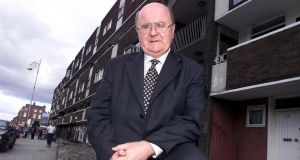 Tax cuts signalled by the Government, and proposed by Fianna Fáil, for Budget 2018 would be “profoundly unfair” and would “favour only those with higher incomes”, advocacy group Social Justice Ireland has said.

The organisation said it had analysed the effect of increasing the standard rate band by €1,000 to raise the level at which people hit the higher rate of tax, something which is understood to be under consideration by the Government.

The group also looked at the impact of a 0.5 per cent decrease in the 5 per cent USC rate applying to incomes between €18,772 and €70,044, along the lines of the Fianna Fáil proposals.

Changing the entry point to the top tax rate provides gains which were greatest for those on higher incomes, he said.

“A single earner on €25,000 gains nothing from this reform and it is only individuals with incomes of €33,800 plus, and couples with two earners with a gross income above €67,600, who gain. The largest benefits flow to those on the highest incomes.”

An €85 increase in the personal tax credit provides the same gain to all taxpayers earning sufficient to pay more than €85 in income taxes. However, below €16,500 for single earners, or €24,900 for couples with one earner, or €33,000 for couples with two earners, there are no gains as up to these points tax credits absorb all income tax liabilities, the organisation said.