Spending on elderly cut by third since 2009, Citizens’ Assembly hears 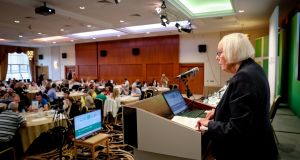 The assembly, a 99-person panel selected to consider a number of issues facing the State, met at the weekend to discuss how best to respond to the challenges and opportunities of an ageing population.

He said “the only statutory scheme” in place at present to care for older people was the Fair Deal scheme which meant “there is an element of protection in the residential sector compared to home care provision, where there is no statutory protection”.

He said that when cuts were being made tended to fall on “discretionary” spending and services that do not have a legislative underpinning.

“This is why home care is often one of the first targets in times of adversity, even though managers know that this is counter-productive in the long-term,” he said. “Although policy purports to favour community-based care, the funding system is biased in favour of residential care.”

Prof O’Shea said it was the case that family carers “bear most of the care burden and financial cost of providing care to older people living at home in the community”.

“For example, of the €2 billion costs associated with dementia in the country, almost half are borne directly by informal carers. If families stopped caring, the care system would collapse,” he said.

Pat Healy, HSE national director of social care, said that almost 50,000 people avail of its homecare supports. It was “hugely effective in providing an alternative to long-stay residential care,” he said.

In his belief some criticisms of the service “are justified and are a symptom of the fact that homecare is not provided on a legislative basis, nor are the services themselves regulated against a set of standards.”

Dr Michael Browne, research consultant to the Citizens Information Board, told the assembly “what we have now is scarcely adequate in the 21st century in terms of long-term support and care for an ageing population”.

He said there appeared to be “universal consensus” on the need for Government “to give far greater priority to home care supports and community supports”.

The assembly’s chairwoman Ms Justice Mary Laffoy said caring for our older population is “a complex and challenging topic” while “much more work is required” to facilitate independent living in Ireland.

“Long-term care is not solely about a health or social care matter, it is about much more than that and just because someone is old does not mean that they do not have a contribution to make, something to say or a role to play,” she said.

She also urged members of the assembly to “open your minds” and “place yourself in the shoes of an older person and consider how you want to live your life as an older person”.