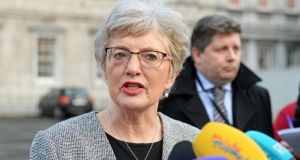 Minister for Children Katherine Zappone is to meet the special rapporteur on child protection, Dr Geoffrey Shannon, in the next week to discuss what children’s-rights organisations have described as grave failures in the State’s protection systems.

Dr Shannon’s audit of more than 5,400 cases of the Garda’s emergency removal of children from their families between 2008 and 2015 found serious failures in record keeping, a dearth of child-protection training for gardaí, and poor and limited co-operation between agencies.

Ms Zappone said that when Tusla, the State child and family agency, was established, in 2014, “it was obvious that a huge amount of work needed to be done” to improve Ireland’s child-protection system.

“This work has well and truly begun,” the Minister said today. “In the months and years ahead any improvements that need to be made will be made.”

She said she would review the report and meet Dr Shannon to discuss his findings and recommendations. “I am determined to do whatever needs to be done to improve child protection in Ireland. ”

Ms Zappone noted a significant expansion in the emergency out-of-hours service in the past 18 months and said there was now full cover across the State. The Garda also had full access to the child-protection notification system, which it did not have in 2015. The system lets it check if a child is at ongoing risk of harm.

The Minister said communications had been enhanced through regular strategic meetings between the Garda and Tusla. “In the coming week a dedicated Tusla official will work with the Garda national child-protection unit. This unit will carry out an audit at local level of the child-protection operations between Tusla and an Garda Síochána.”

The Irish Society for the Prevention of Cruelty to Children said the Garda must implement the recommendations of the report in full. Tusla must also recognise the need for adequately resourced, around-the-clock social-work services.

The organisation called for a full response to the report, along with an action plan, to be provided to the Oireachtas within a month. It also said a full plan, outlining the detailed implementation of the recommendations within a year, should be published within six months.

The Children’s Rights Alliance called for better interagency working and for the establishment of joint investigation teams between the Garda and Tusla to prosecute and investigate child-protection cases. The alliance’s chief executive, Tanya Ward, said the overriding recommendation was that a properly resourced out-of-hours social-work service was needed. Specialist child-protection training must also be introduced and the Garda’s Pulse computer system reformed.

Pavee Point Traveller and Roma Centre said Tusla needed to provide a 24-hour child-protection service. It said adequate resources and co-operation between Tusla and the Garda were essential. The organisation criticised what it said was a lack of comprehensive anti-racism and diversity training in the Garda and Tusla and said that it showed failing in relation to ethnic minorities.

Epic, an independent advocacy group for children and young people who have lived in care, said it was alarmed at Tusla’s reliance on a private fostering service to fulfil part of its out-of-hours service.

The Irish Foster Care Association said children being taken into care under section 12 of the of the Child Care Act 1991, the legislation that allows the Garda to remove them from their homes, needed to be placed in a safe and appropriate environment. “All involved in dealing with these children should be adequately trained and supported to deal with the complex needs of these children.”

Fianna Fáil’s spokeswoman on children, Anne Rabbitte, said she was deeply disturbed but unsurprised by the findings of the audit, and she called for a “radical overhaul” of the current system.