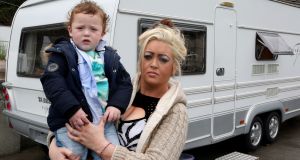 Barbara Delaney with her son Miley, who has cystic fibrosis, at the halting site. Photograph: Joe O’Shaughnessy

Ten young Traveller families, including 23 children aged under 11, face homelessness as Galway City Council moves to evict them from a severely overcrowded site.

Some 16 households – all of the extended Delaney family – are living at the Cúl Trá halting site in Salthill, which was opened in 1996 for six families. Ten families who have made their homes there over the past 20 years were given less than three weeks’ notice to “remove” their caravans and “all [their] belongings from the site” by Monday. Some have lived there all their lives.

The notices to quit have sparked a near total collapse in relations between Galway’s Traveller representatives and the council. They were sent on May 17th and followed three council meetings – in February, March and April – where the provision of new Traveller accommodation in the city was blocked by councillors.

City manager Brendan McGrath has indicated he may use his executive power to over-ride opposition to Traveller accommodation.

An estimated 20 per cent of the States’s Travellers live in the west and northwest, with 1,666 recorded in Galway city. More than 1,000 of these are under 25 years of age, according to the Galway Traveller Movement.

Cúl Trá is on land owned by Galway diocese, which agreed to the Traveller accommodation for an initial 25 years.

In letters to the families, the council says solicitors for the owners had “informed us that if the current overcrowding continues, ie that more than six families are residing on the site, the agreement will be terminated in March 2019. It is our aim to keep the original six families on this site as agreed with the owners .

“As the current overcrowding is a fire, health and safety concern the council is obliged to make sure action is taken to have this current situation made safe.” The recipients are “requested” to present with their families at the council’s housing department to “be assessed for housing and homeless services”.

In the 21 years since Cúl Trá opened, children of the six original families have started their own families. With nowhere else to go, 10 households are sharing the parents’ bays.

Caravans are less than a foot apart, but the site is tidy, well-kept with painted flower pots throughout, a grotto and clean green space in the centre where children play.

Among those facing eviction are Barbara and Jim Delaney and their three children, Jimmy (10), Michael (9), and Miley (2) who has cystic fibrosis. Barbara has lived in Cúl Trá since she was a child.

“We’re happy here. The boys go to Scoil Éanna up the road.” She says the family has been on the council waiting list for Traveller accommodation for 11 years.

“We were shocked when we got this letter. We were expecting temporary accommodation while they decide where to build Traveller accommodation, and instead they’re putting us out by the side of the road.”

Kathleen Delaney-Ward and Laurence Ward have three children Jimmy (4), Danny (18 months) and Martina (four months). “Why is the council putting us out now? They know we’ve been overcrowded for years,” she says.

“We don’t mind leaving this site if we have somewhere to go. But I am not going into a B&B with small children, or the side of the road. We have a home here. I’m very worried. To be honest I am very angry, very afraid. We’re hurt. We don’t want to be out in people’s way when we can be here, passing no heed to anyone.”

A spokesman said the city council had “an obligation to ensure the safety of our tenants”.

Bridget Kelly of Galway Traveller Movement said the families were being “punished because of the failure of the council to provide adequate, appropriate Traveller accommodation”. She pointed to a directive from the then Department of Environment in December 2015, notifying local authorities to conduct fire-safety audits of all Traveller sites, but stipulating that “nothing in this . . . process is intended to be used to address broader Traveller accommodation issues in a negative way”.

The families and supporters plan a protest at the site on Tuesday, saying the 10 families with notice to quit will not leave.

The spokesman said: “The council are seeking to secure alternative accommodation for eligible occupiers on site . . . The council have also engaged with Galway Traveller Movement to advise on the requirement to regularise occupancy and have reiterated the importance of securing the safety of tenants and the sustainability of the site beyond 2019. It is regrettable that members of the Galway Traveller Movement have decided to withdraw from the Local Traveller Accommodation Consultative Committee .”

A spokesman for Galway diocese said management of the site fell “entirely under the remit” of the council.

“The diocese . . . presumes the local authority will adhere fully to all planning and health-and-safety regulations,” he said. “The diocese also presumes the council and its officials will treat all people towards whom they have legal obligations with courtesy and respect while fully according each person their dignity, their legal rights and their due provisions and entitlements. No less should be expected from public servants.”