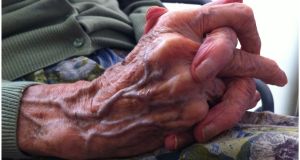 A 95-year-old man from Dublin, who is confined to a wheelchair, said he had been in a private nursing home for almost three years and that “they are great places provided they are properly run and serviced”. File photograph: Bryan O’Brien/The Irish Times.

Loneliness and isolation were common themes in interviews with elderly people on their experience of nursing homes that were played to members of the Citizen’s Assembly at the weekend.

A woman (86), who lives in the south of the State, said she spent 10 months in a nursing home in Dublin following a hip injury. She was deemed well enough to return home but her children wanted her to stay there.

“I was away from everybody, sure I didn’t know a sinner and I loved my home so I got very, very homesick,” she said. “They [her children] said ‘mam I think you’re foolish, you’ll be on your own and we’ll be worried sick about you.’”

The woman took matters into her own hands and ordered a taxi, at a cost of €320, to bring her home.

“I said to myself when I was in the taxi coming home ‘praise the lord, I’m doing the right thing,’” she said. “I was so lucky to have the money. The children weren’t very pleased with me, they didn’t speak to me for about a month because they thought I was taking things too much into my own hands.”

A 95-year-old man from Dublin, who is confined to a wheelchair, said he had been in a private nursing home for almost three years and that “they are great places provided they are properly run and serviced”.

“You may not necessarily get a single room, you may have to share, you could have three other people in a room with you. Depending on who you’re sharing with, it could be hell,” he said.

However, he said some interaction between members of the local community and nursing home residents would be welcome.

“There are people here who have no visitors, now that’s sad. Unless you can get out there’s no contact with the outside community. I think that the local community should have an association with the nursing home, whether it’s the golf club, the local GAA club or school.”

The assembly also heard from Eamon O’Fearghail (47) who cares for his widowed mother Kathleen (87) who suffers from dementia. He said he wanted to respect her wish not to end up in a nursing home.

“It was not so much a choice but rather a natural decision born out of necessity. In hindsight, if I knew precisely what I was getting into I might have chosen a different option. I would say that most carers are reluctant carers. They have taken on the role out of love and a sense of duty,” he said.

Mr O’Fearghail, who has been caring for his mother for five years, said at one point he felt he was on the verge of a mental breakdown.

“I actually turned up to a psychiatric hospital and asked them if there was anything they could do for me. Unfortunately, there was nothing and I was referred back to my GP. My medical insurance would not cover any services they could provide.”