Pay talks with State employees to restart this afternoon 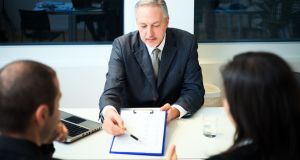 It has forecast that the fiscal space for next year will be about €200m. File photograph: Getty Images

Talks on a new agreement between the Government and 300,000 State employees will recommence on Wednesday afternoon.

Negotiations adjourned at about 11.00am on Tuesday after 12 hours. Sources said Government negotiators required time to “crunch numbers”.

Sources said there had been “a fair bit of progress” on a number of non-pay productivity issues but maintained that controversial issues such as outsourcing of public services and additional unpaid working hours remained unresolved.

Sources said the Government had not tabled formal pay proposals.

Some draft text has been drawn up which would involve establishing a process within a new agreement to examine staff recruitment and retention difficulties. However this text has not yet been agreed.

While no proposals on pay improvements were formally tabled, it is understood the Government is insisting on greater pension contributions from most public service employees under a new three-tiered structure.

The Government is expected to agree to eliminate the existing public service pension levy which was originally put in place as an emergency measure in 2009 following the economic crash and which currently realises over €700 million each year for the exchequer.

Sources said the Government had indicated it wanted to generate €550 million from the proposed new permanent higher pension contributions.

It is understood that under Government proposals about 23,000 staff with faster accruing pensions such as gardaí, prison officers and fire fighters would effectively pay the same as at present under the pension levy.

The vast bulk of public service staff – those appointed prior to 2013 and who are covered by the standard superannuation scheme – would also have to pay more, although no details had emerged about the proposed scale of the contributions envisaged or the income threshold above which the additional contributions would take effect.

Staff appointed since 2013 and who are covered by a less generous, career average, pension scheme would benefit most.

Trade unions and organisations representing gardaí, prison officers and fire fighters are understood to have strongly opposed any move by the Government to make groups with faster-accruing pensions pay more.

Any new pay deal agreed is expected to be “back- loaded”, with the bulk of any increases coming towards the end of what would probable be a three-year deal.

Government representatives again told trade unions on Tuesday that the scope for increases in 2018 was very limited. It has forecast that the fiscal space for next year will be about €200 million.

Any increases could be delayed until later in 2018, according to some sources.

The Government up to last night was also insisting on a relaxation of existing restrictions on outsourcing of public services. Unions have argued this is a “red line” issue for them and that there will be no deal agreed if the Government sticks to its current position.

Sources said original Government proposals to increase the scope of Saturday working could be diluted with a review established to examine this issue.

The Government is also understood to have insisted that the requirement on staff to work additional unpaid hours will remain.