Some Americans went ‘against their interests’ by voting Trump 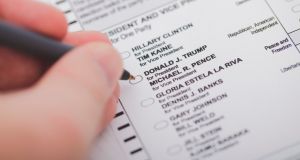 Richard Kearney: There was a feeling of how did this happen? Photograph: iStock

Many of those who voted for US president-elect Donald Trump clearly voted against their own interests in relation to issues such as healthcare and social welfare, an Irish academic teaching in Boston has said.

Richard Kearney, who is Charles Seelig Professor of Philosophy at Boston College, said there was “huge turmoil and shock” among his class of 100 students when the result of the election emerged in November.

“There were students crying in the class…they could hardly believe their ears,” Prof Kearney said.

In an interview on RTÉ Radio 1’s Marian Finucane programme on Saturday, he said there was now a “lot of mobilising” and “radicalising” of students that he had not seen since the 1960s or 1970s.

There was a feeling of “how did this happen?”

Some of the students, however, had not gone out to vote in the presidential election.

Prof Kearney said his students – about 90 per cent of whom had voted for the Democratic candidate Hillary Clinton - had discussed the issues.

The two students who had voted for Mr Trump “did articulate their views and were encouraged to do so”.

They had said they did not, in fact, believed what Mr Trump was saying, or that he would actually follow through on his claims that he would harden the border with Mexico and withdraw from international alliances such as Nato, or that he would ban Muslims from entering the US.

“But they wanted magic, they wanted change and they felt that this was a man of charisma, sort of like the trickster character in old Celtic mythology – a shape-shifter. They didn’t know what he was going to do next and they liked that.” It was like gambling or a video game, Prof Kearney said.

He attributed it to “an educational deficit”, but also to a “phantasmagoria”.

The students had also discussed the nature of the media and the questions of “post-truth” and fake news, he said.

There was racism in the US and the “visceral hatred” of Mr Obama was “incredible until you witness it”, he added.

He is the author of over 20 books on European philosophy and literature.