Syrian refugees for Roscommon to include 13 young children 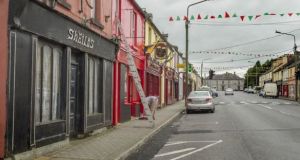 Thirteen of the 82 Syrians who are expected in Ballaghaderreen, Co Roscommon, in early March are children aged four or under, it has emerged.

The group, comprising mainly young families, includes a total of 37 children, including 19 in the five-to-12 age category while the remainder are teenagers, according to figures supplied to local Oireachtas members by the Department of Justice.

Local Fianna Fáil TD Eugene Murphy has called for the appointment of a child psychologist as a matter of urgency given the likelihood that the children will have experienced severe trauma.

“There is currently no child psychologist based in north Roscommon where there is already a waiting list,” he said.

Michael Frain, chairman of Roscommon Leader Partnership, which is one of a number of local agencies due to meet Department of Justice officials in the next two weeks, said the community was hoping for an opportunity to welcome the refugees but did not want to impose themselves on people who might need time to recover from trauma.

“We do not want to foist anything on these people and in fact we have been offered help from a number of sources including people who have worked in the past with refugees,” he said.

Inundated with offers of help

Mr Frain, a shop owner in Ballaghaderreen and chairman of the local “Town Team”, said there was a lot of goodwill locally towards the refugees.

The organisers of a “Ballaghaderreen Welcomes Refugees” meeting held in the town on Monday night said they have been “inundated” with offers of help from people willing to provide practical assistance, including English language classes.

“We would like to have some welcoming event to mark their arrival and would not like to think they will be ushered in under cover of darkness but we appreciate that these people may not want a fuss,” said Mr Frain.

Local Oireachtas members who were briefed by Minister of State David Stanton this week were told that those travelling to Ballaghaderreen were currently enduring sub-zero temperatures in Greece where they were sleeping in tents and also in containers at ports.

Local politicians and community groups are still seeking assurances on the education and health services which will be provided. A playgroup will be established in the former hotel and a decision will be made on whether older children will be catered for in a classroom setting in the centre, or whether they will attend nearby schools.

A special community fund is to be established, which will allow local groups to apply for grants of between €5,000 to €10,000 for projects aimed at helping the refugees integrate into the local community.

The group of 82 refugees will have their medical needs assessed in Dublin before being transferred to Ballaghaderreen.

Politicians including Independent TD Michael Fitzmaurice, Fine Gael Senator Maura Hopkins and Mr Murphy sought commitments from Mr Stanton on whether goods, services and staff would be sourced locally for the refugee centre.

It is understood that the Minister acknowledged that this was not stipulated in the contract with the owners of the former Abbeyfield Hotel, but department officials said they were anxious that the local economy would benefit.

The department told the local Oireachtas members that a two-year contract was signed with the owner of the accommodation in mid-December.

It was a matter for the contractor as to “how and where they source their various employees – including cooks, cleaners and security staff”, according to a department briefing document.