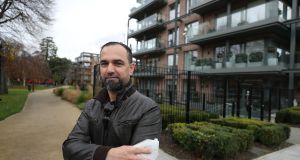 Tenia Karim, a social housing tenant: “I was brought up with principles and dignity. This hurts my dignity.” Photograph: Nick Bradshaw

Social tenants in a luxury apartment complex in Dublin say they are being “discriminated” against as they are not allowed to use the property’s gym, meeting rooms or roof terrace, keep pets or attend residents’ meetings.

The exclusion of households nominated by Dublin City Council from facilities enjoyed by their private neighbours in the Marianella complex in Rathgar is “just the latest example” says Independent councillor Mannix Flynn of “social exclusion operating under the guise of social inclusion”.

He is calling on the council to “take responsibility” to ensure households it nominates to live in private developments are treated “with equity, dignity and respect”.

The developer sold 19 units to Dublin City Council, fulfilling its obligations under part five of the 2000 Housing Act to offer 10 per cent of units in developments of 10 or more homes, for social housing.

One resident, Tenia Karim says soon after he moved into his one-bedroom apartment in January 2019 he left his gym in nearby Dartry to join the gym on his doorstep. However Mr Karim was told he could not join because he lives in Orwell Grove.

Following protracted contact with management company, Petra Property, in which he asked to pay to use the gym, he received an email dated November 25th, 2019, saying management had “decided that no change will be made to the access to the gym and will remain for those it was originally intended”.

A spokeswoman for Fold Housing, which made unsuccessful representations on his behalf, explained that as it has paid reduced management fees its tenants could not access the gym. “But this does not explain why we are not even allowed pay to join,” argues Mr Karim.

Originally from Kurdistan, he says: “I was brought up with principles and dignity. This hurts my dignity. They do not like when I say ‘discrimination’ but what other word do they want to use?”

Jane Doyle-Reilly and her husband Robert Reilly moved in January 2019, from a council flat in the city centre. They had applied for a transfer after the death of a son in an accident in 2012, and the subsequent suicide of their only other child, a younger son, in 2014.

“We were in a really bad place when we moved here. We wanted to join the gym but were told very bluntly, ‘Oh no, Orwell (Grove), we don’t deal with them’.”

They had to give up their younger son’s dog before moving. Fold has a strict no-pets policy while private residents can have pets.

“He was a Shih Tzu cross, a gorgeous ball of fluff,” says Ms Doyle-Reilly. “I cried giving him up. When I was here a few days and I saw everyone else here walking their dogs, I was fit to be tied.”

She is “disappointed” Orwell Grove residents cannot access the decked roof space, while residents in other blocks can use theirs. Fold says the roof is for maintenance access only.

“They are lovely apartments but what’s going on, we are stigmatised here,” says Ms Doyle-Reilly. “You feel it every day. If we could go back to Cuffe Street I’d go in the blink of an eye.”

Resident Angela O’Mahony had to give her Chihuahua, Toby, to family. “It’s not fair when you see all the other dogs.”

Other tenants who did not want to be named said there had been occasions where the concierge refused to accept their parcels due to their address. All mentioned not being allowed to use the gym.

“Feedback from our tenants in Marianella is that they are very happy . . . Our service agreement does not provide for membership of the gym/resident’s club. We are a charitable organisation of limited resources and they are focused on the provision of housing to our tenants.” Petra management did not respond to several requests for interview.

“What’s happening here is disempowerment and social exclusion operating under the guise of social inclusion. Dublin City Council is responsible for ensuring its households are treated with equity, dignity and respect”.

A council spokesman said the authority had service level agreements with all AHBs managing council units. “All tenants sign up to a tenancy agreement with the AHB as the named landlord. The AHB must register all tenancies with the Residential Tenancies Board. AHBs provide a thorough explanation of the tenancy agreement and the rights and obligations of the landlord and the tenant.” The council did “not regard access to a gym as a welfare issue”.

*This article was amended on Saturday November 21st, 2020.