RTÉ removes 1982 clip of Twink in blackface from archives 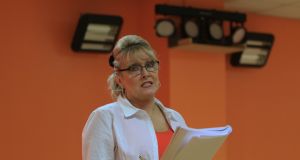 In the clip, Twink and three other actors had been made up as Gladys Day and the Pits, a take off of US black quartet Gladys Knight and the Pits. Photograph: Nick Bradshaw/The Irish Times

A March 1982 clip featuring a Twink in blackface has been removed by RTÉ from its archives. She and three other actors had been made up as Gladys Day and the Pits, a take off of US black quartet Gladys Knight and the Pits, for an episode of the The Live Mike light entertainment show, featuring Mike Murphy.

A spokeswoman for RTÉ said “times have changed since then” and that “RTÉ reviews programmes and content available on the RTÉ Player and on RTÉ.ie on a daily basis.”

RTÉ, she said, “is mindful of the ongoing discussion around racism and programme material, and that content made in the past may no longer be acceptable by today’s standards. In this context, where an issue arises RTÉ will give due consideration to the content and make decisions in keeping with our editorial standards and audience expectations.”

She also pointed out that “current programming and content produced by RTÉ must meet a number of compliance requirements before broadcast or publication. The requirements reflect the changing cultural landscape.”

All my family have left of my father is his work and reputation. He abhorred racism of every type and actively worked against it. Whilst insignificant compared to the suffering and upset of victims of racism, you might forgive me for feeling more than a little sad about this. https://t.co/SWr9N4k81M

Don Morgan, son of comedian Dermot Morgan, has expressed concern at social media calls for the removal of an episode of Father Ted where the titular character ends up portrayed as a racist in an misunderstanding with the Chinatown residents of Craggy Island.

In a tweet he said his father “abhorred racism of every type and actively worked against it. Whilst insignificant compared to the suffering and upset of victims of racism, you might forgive me for feeling more than a little sad about this.”

He said “all I have left of my father is his work and reputation”.

The episode Are You Right There Father Ted?, first broadcast in March 1998, begins with Ted giving a less than flattering impression of a Chinese person, only to then turn around to see the Yin family, a Chinese family living on the island, watching him from outside.

Speaking on RTÉ’s Radio One’s Sunday with Miriam, Mr Morgan described the episode as “a comedy of misunderstanding” which had “hilarious consequences”, but was that it was “not offensive to the Chinese community”.

He was less certain about an episode of Fr Ted where blackfaced priests dressed up as US trio the Supremes took part in a talent competition.