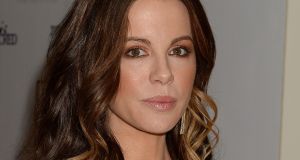 Hollywood actress Kate Beckinsale who has given her support to the decriminalisation of abortion in Northern Ireland. Photograph: PA

Hollywood actress Kate Beckinsale and Strictly Come Dancing presenter Claudia Winkleman are among more than 60 female celebrities who have signed an open letter calling for the decriminalisation of abortion in Northern Ireland.

Northern Ireland has some of the tightest restrictions on the procedure and the issue is due to be raised in parliament on Friday as part of a campaign for change.

The letter to British prime minister Theresa May is supported by stars from worlds of acting, television and fashion, including Emma Thompson; Doctor Who’s Jodie Whittaker; Claire Foy, who played the Queen in the Netflix hit drama The Crown and her successor in the role, Olivia Colman.

Almost 50,000 others have signed a petition calling for the decriminalisation of abortion

The letter read: “This Friday, women across the UK will be waiting with anxiety and fear as their reproductive rights are debated in parliament. We’re counting on you (Theresa May) and your government to stand with women and decriminalise abortion.

“Give us choice and control over our own bodies. Show women from Northern Ireland that you won’t stand for them being governed by one of the harshest and cruellest abortion laws in the world.

“Show us that you value and champion the rights of all women, no matter which part of the UK they’re from.”

A termination is only permitted in Northern Ireland if a woman’s life is at risk or if there is a risk of permanent and serious damage to her mental or physical health.

The 1967 Abortion Act which governs the rest of the UK was not extended to Northern Ireland.

A Private Members’ Bill which would decriminalise terminations in the North is due to be debated at Westminster on Friday.

Northern Ireland’s biggest political party, the DUP supports restrictions on terminations and has prevented change in the past.

Labour MP Diana Johnson, who has brought forward the decriminalisation Bill, said: “The situation in Northern Ireland is grave and urgent.

“My decriminalisation Bill has support from almost every UK political party and will be in Parliament on Friday. The government must give it the time it needs to progress.

“Women need this change. Abortion is a healthcare and human rights issue. It’s time it was treated as such.”

“The UK government must give time for the Bill to go through Parliament so that MPs have the opportunity to stop the criminalisation of healthcare services and support the rights of women – including those in Northern Ireland.” - PA