A 'Repeal the 8th' mural by Irish artist Maser is removed from the front wall of the Project Arts Centre in Dublin's Temple Bar. The Project was told by the Charities Regulator that the mural was "political activity" and therefore in breach of the Charities Act 2009. 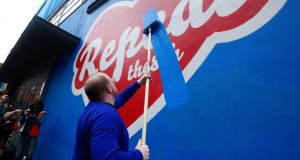 The Repeal the 8th Maser artwork outside the Project Art Centre being painted over by Cian O Brien. Photograph: Cyril Byrne/The Irish Times

A mural backing repeal of the Eighth Amendment has reappeared in Dublin’s Temple Bar following its ordered removal from a nearby wall earlier this week.

The previous version, featuring the words “Repeal” inside a red love heart, was removed from the side of the Project Arts Centre building on Monday.

It followed a direction from the Charities Regulator which deemed it a “political activity” in breach of its code. The Project Arts Centre is a registered charity.

However, on Friday a revised version of the same mural, designed by the artist Maser, reappeared on the side of Amnesty International’s office, about 400 metres away.

“We are proud and honoured to host this iconic piece of art, which captures the essence of this campaign,” said Amnesty executive director Colm O’Gorman.

“This mural is a testament to the unwavering spirit of those who have campaigned for 35 years for its repeal.”

The Charities Regulator had told the Project Arts Centre that the placement of the political artwork on its wall was in breach of the Charities Act 2009 and not in line with its “charitable purpose”.

On Monday, its artistic director Cian O’Brien said its acquiescence was in “defiant compliance” to the regulator’s demands. Throughout the centre’s 52-year history, he said, it had placed itself at the centre of social and political issues.

Welcoming the tenacious reappearance of the mural on Friday, Mr O’Brien said: “I’m delighted to see that Maser’s artwork will have a life beyond its short one on the wall of Project Arts Centre. I hope this is the start of many more replications of this important artwork across the city.”

Its new home is on the side of Seán MacBride House on Fleet Street. It is the third time the piece has appeared.