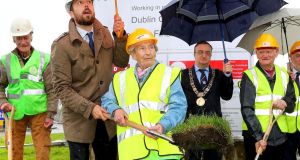 A “cost rental” housing scheme which has been used in cities across Europe for decades will be a key part of the Government’s plan for the future Irish rental sector, the Minister for Housing Eoghan Murphy has said.

Speaking at the turn of the sod ceremony of the New Dolphin Park development for older people in Rialto, Dublin, Mr Murphy said his department was investigating the cost-rental scheme as a means of making the rental market more affordable and accessible to people.

“It’s very common in other parts of Europe to have quite a large percentage of the rental market being cost rental. It’s something we want to deliver here.”

Mr Murphy said he had not yet identified any specific sites to implement the cost rental feature but had met with the European Investment Bank to discuss how the system could be rolled out across the State.

The Minister said there must be a balance between the refurbishment of existing buildings and construction of new homes as part of the Government’s Rebuilding Ireland action plan for housing and homelessness.

“We know there’s a need out there and it’s great that we can do this within an existing community,” said Mr Murphy, referencing the regeneration of the Dolphin Park site for senior citizens.

Asked to comment on the delay in publishing the monthly homeless figures, Mr Murphy said “a more accurate” structure was needed for local authorities to report on homelessness to the department. “Every month they come on a different day and a different time and we want more consistency.”

Residents from the Dolphin Park area gathered in the rain on Friday morning to watch Mr Murphy and Lord Mayor of Dublin Micheál Mac Donncha turn the sod on the site of new purpose-built housing for older people, which is due to be completed in February 2019.

The new apartments, which were first announced in 2014 and led to a collaboration between the Fold Ireland housing organisation and Dublin City Council, will replace the existing bedsits where older Dolphin’s Park residents are currently living and which date back to 1957.

The complex will feature 43 units, most of which are expected to be filled by single people. Fold Ireland came on board after concerns were raised that the housing project was moving too slowly for residents, explained Fold development manager Tina Donaghy. “In that process the older people became quite frustrated because they were worried will we still be alive by the time this development reaches us,” she said.

Ms Donaghy says the apartments will allow older people to remain living independently in “affordable” accommodation for as long as possible in a safe and secure environment. “When you give all these key things to people they start to thrive again, they start to be able to look after themselves a bit better.”

Mr Mac Donncha said the new homes would “promote positive ageing and independent living” and welcomed their construction as part of the wider regeneration of the Dolphin’s Park area.