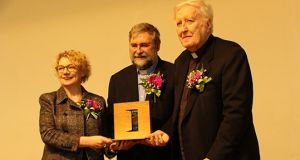 One of Ireland’s most decorated missionaries, Columban priest Fr Patrick James McGlinchey (89), has died in South Korea where he had been since 1953. From Raphoe in Co Donegal his work earned him South Korea’s highest national honour, the National Recommendation Award, in 2014; the Ramon Magsaysay Award in 1975; the Jeju Culture Prize in 2002; and Ireland’s Presidential Distinguished Service Award in 2015.

The latter award recognises the contribution of Irish people living abroad to both their newfound homes and the greater Irish community.

The priest was 26 when he went to South Korea’s Jeju Island and found it in poverty. He set about trying to improve conditions in any way he could, primarily through agricultural training.

With a perimeter of 120 miles and up to 70 miles off the southern coast of the mainland, Jeju is by far the largest island in South Korea.

In addition to introducing modern farming methods there, Fr McGlinchey founded St Isidore Farm in 1961 where he used the latest farming techniques from Ireland. It remains thriving to this day. He also introduced the first credit union to the island.

The farm was a success and its profits helped establish, among other things, a clinic, a nursing home, a hospice, and a youth centre.A wool processing and weaving factory was also t up

Irish Ambassador to Korea Aingeal O’Donoghue visited Isidore Farm in February 2015, where she presented the Presidential Distinguished Service Award to Fr McGlinchey. She said he had brought “a unique blend of spiritual leadership and an array of practical initiatives to help lift thousands of Jeju citizens out of poverty.”