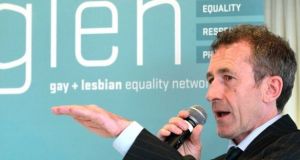 Glen provided supports worth €11,500 to its co-founder Kieran Rose when he stood unsuccessfully for the Seanad in 2016. File photograph: Sam Boal/RollingNews.ie

More than €50,000 was spent using the Gay and Lesbian Equality Network’s (Glen)company credit cards but the sum was never adequately accounted for through till receipts or invoices, an investigation into the charity has revealed.

The Charities Regulator on Friday reported “inadequate and inappropriate controls” of Glen credit cards, personal expenditure and cash withdrawals following revelations that the group used charitable funds were used to support the political campaign of its co-founder.

Glen provided supports worth €11,500 to its co-founder Kieran Rose when he stood unsuccessfully for the Seanad in 2016. The money was later reimbursed but the board was not informed of the financial help provided.

An investigation into the charity was launched in 2016 when a newly appointed executive director raised the issue of transparency with the board.

An investigation into Glen found that while personal expenditure on credit cards was repaid between January 2014 and May 2017, an additional €51,174 was spent using company credit cards and was not adequately accounted for.

The regulator reported an “overall absence of proper financial procedures” and said the necessary safeguards had not been implemented to protect the charity’s assets and funds.

The charity’s trustees “appeared to place relatively high levels of trust in staff members without adequate checks and balances being in place to provide necessary oversight of all financial transactions and financial reporting”.

Board unable to detect risks

Investigators reported that the charity’s weak financial reporting structure meant board members were unable to detect the risks highlighted in the report. An absence of formal agreements between Glen and other third parties regarding expenditure and sums of money advanced to the charity was also noted in the report.

Charities Regulator chief executive John Farrelly stressed that there were “key lessons” to be learned by Irish charities to ensure financial controls are implemented with full disclosure by management to charity trustees so they can effectively manage their organisation.

Mr Farrelly told RTÉ’s Morning Ireland that only the former executive director and one administrator knew about the use of charity funds in Mr Rose’s Seanad campaign.

“The overall learning from this, for me and for all charities is, we can see a pattern here, where there’s a lack of robust governance and oversight and indeed disclosures by the management, even the most vibrant charity - and we have to recognise this charity was vibrant, and was making a vital, vital modern contribution - was put at risk.

“The lack of oversight and the lack of disclosure by the most senior people - if that’s not properly done, the charity faces significant risk and that’s what happened here.

“For me as a regulator watching this, but also as a person who watched an active charity make a vital contribution within Ireland, it is a sad day but we must learn the lessons for the future.”

The Glen charity was founded in 1988 and played a role in the campaign for same-sex marriage ahead of the 2015 referendum. The charity is currently being wound down.