A total of 11 bishops and 61 priests took part in the concelebrated Mass at in Galway’s Cathedral of Our Lady Assumed into Heaven and St Nicholas. Many people were standing in the cathedral which has a capacity of 1,600. Video: Joe O'Shaughnessy 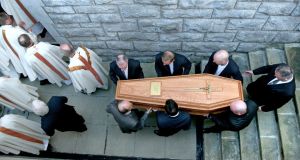 Nephews of former Bishop of Galway Eamonn Casey carry his coffin to the crypt at Galway cathedral on Thursday. Photograph: Joe O’Shaughnessy

Eamonn Casey was buried on a windy, intermittently sunny day in the crypt at the Cathedral of Our Lady Assumed into Heaven and St Nicholas in Galway.

The largely older congregation that gathered for the funeral almost filled the church.

They had mingled earlier with younger tourists who wandered around looking towards the roof of the 50-year-old cathedral. There were a lot of camera clicks when President Michael D Higgins arrived outside (he had a long friendship with Casey built around their shared interest in human rights activism in the 1980s) but there wasn’t a huge political presence.

Things have changed in the church in Ireland since the cathedral was built. There’s now a “coeliac communion station” and the service was apparently live-streamed so that the former bishop’s brother, Father Micheál Casey, could watch in Australia.

A display to the side of the stage pleaded for vocations and a woman in front of me sporadically took out her phone to take pictures of various bishops she recognised. There were many bishops to be recognised. The altar was soon filled with clergymen who emerged to the sounds of the choir singing Nearer My God To Thee.

The cathedral was celebrating its half century and a historical display along its walls had a section about the former bishops. The entry on Eamonn Casey excluded several biographical details. The concelebrating bishops had no such qualms.

The energetic and charismatic Casey had been a beloved Irish celebrity once. Then it emerged in 1992 that he had fathered Peter, a child he refused to acknowledge, with his American second cousin once removed, Annie Murphy.

As religious hypocrisies go, it looks almost benign nowadays, but it was the first crack in the church’s pious facade in Ireland and it spoke to a wider culture of shame and secrecy around women and sex.

Indeed, many at the time preferred to blame the self-possessed Murphy who had revealed this secret (the country hated women more openly then) but Casey owned up, resigned his bishopric and apologised. The church exiled him to Ecuador and then Britain. He only returned to Ireland in 2006.

Bishop Brendan Kelly of Achonry delivered the homily and spoke explicitly about “the hidden realities in [Casey’s] life” and the people who “had been hurt and wounded … wounds that do not always heal easily or quickly. We remember these people too today. We acknowledge their suffering”.

Of course, Casey did much good and this was remembered too. He helped form the charity Shelter in London in the 1960s and he helped form Trócaire in 1973. He personally witnessed the massacre by government forces of those attending Archbishop Óscar Romero’s funeral in El Salvador and spoke out more than most bishops on issues of human rights. He boycotted Ronald Reagan’s visit to Galway in 1984.

The many, many clergymen made light work of communion. Watching them operating amid the incense and bells, the sunlight occasionally breaking through the stained glass, it was hard not to remember that Casey himself had been forbidden from saying Mass in public after the scandal. This had apparently hurt him greatly.

After the ceremony, a procession of clergy, followed by immediate family, went out to the crypt. Prayers were piped into the cathedral from the crypt for everyone else to listen to. The choir joined in with the slightly distorted singing that came through the speakers.

Old neighbours greeted each other and remembered Casey. People spoke about local parishes and small kindnesses. Afterwards some went to see him in the crypt.

In the book of condolences people generally kept their sentiments brief, though one had written: “I have such great memories of you with the pope in Galway in ’79 with my nursing friends.”

In the end, Casey was suffering from Alzheimer’s disease. His son Peter, with whom he had become good friends in the second half of his life, spoke in an interview in 2013 about how the former bishop had started to forget things about 10 years previously. He died on Monday at the Carrigoran nursing home in Newmarket-on-Fergus in Co Clare where he had lived and been cared for since 2011.

Ireland had changed dramatically by then. A lot had happened since Eamonn Casey’s disgrace. It didn’t seem quite so bad anymore.

Inside the crypt, the church showman, exiled for making a show of the church, was put to rest.