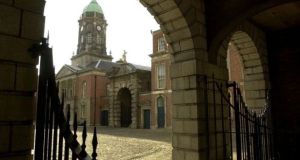 Dublin Castle: the results of the towns’ “health checks” were announced during a workshop at Dublin Castle on Thursday. Photograph: Cyril Byrne

Irish towns are being encouraged to have a “health check” in a bid to be more attractive places to live and work, emulating areas like Westport and Tralee.

The Heritage Council and grocers’ forum RGDATA have collaborated to ask communities themselves to rate their towns.

Facilities, architecture, shopping opportunities, opinion surveys and general good feeling may all be taken into account in compiling a score card on the attributes of their home or business place.

“We have a beautiful Georgian street in Deny Street, we have a very attractive public realm, there are green spaces we have beautiful pavements, we have lovely old buildings,” she said.

Stephen Purcell of consultants Future Analytics which examined towns in Co Carlow said the importance of the approach was that it was “inclusive”. “You have grassroots people sitting down with planners to decide policy,” he said. In relation to Co Carlow, he said the towns were well preserved and the level of preservation on vacant buildings was also good.

At a workshop of participants in Dublin Castle on Thursday, the results of health checks of a number of the towns were listed. Weaknesses identified in Ballina included the perception of the town as a “well kept secret”, the distance from the motorway network and the “fragmented” nature of the town.

A weakness identified in Cashel was the “disconnect” between the Rock of Cashel and the town.