Ireland’s call: Border question needs to be isolated from sphere of economics 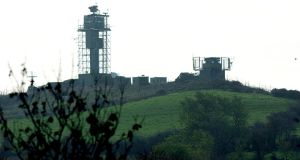 British army watchtowers on the Border in south Armagh in 2001. Photograph: John Giles/PA

It hung in a wardrobe in the back bedroom for years. A gauze-sleeved, full-length white gown, sewn with hundreds of sequins which rattled gently when you touched them. When the Carlingford Lough pilot died a few years before her own death, my mother went quiet. She wasn’t a woman much given to sentiment but she turned her face away.

“He smuggled the material for my wedding dress across the lough.”

It’s a fragile image of intimacy undermined. All the things that a wedding dress represents reduced to contraband.

There is no such thing as a soft border. It doesn’t exist. There is no such thing as a solely economic border. A frontier becomes an institution and draws the shape and the mechanics of an institution to it. There is talk of customs posts set back from the border as if the geographic placing of the custodians might make a difference, as if the Border would not still be in the same place.

There’s talk of an electronic border. It’s a dystopian sleight of hand, a futurist non-solution introducing new paranoias into a place which has had enough of them, Don DeLillo’s sinister buzz of implication still audible. The idea examined has the same daft logic as the system of concession roads and unapproved crossings of the past, devices that sent people sneaking around their own patch, half-shamefaced, half defiant.

They’re digging in the archive and coming up with monochrome photographs of the old Border ... The ‘Stad’ signs and customs men in overcoats and peaked caps that seem too big for them. Comic book officialdom, the cast of Carry On Up The Border if you don’t mind the economic and social wasteland, the everyday pettiness of checking car engine numbers, the threat to a bride’s bolt of sequinned cloth, the gimcrack regulatory contrivances of separation and isolation.

The reality became cratered roads, corpses dumped in black plastic bags, surveillance towers, bullet-riddled gospel halls, bullet-riddled homes. You got the full force of it at night. Driving on the empty roads through eerie zones emptied of all except watchfulness and ill-intent.

Revenue men are reported to be scouring the Border roads of the northwest for new custom sites. You’d have to ask under what petty authority they are acting? What facts-on-the ground, make-a-regulation merchant decided to pre-empt accountability? Maybe they could raid a few poitín stills while they’re at it.

I’m sitting on my neighbour Wesley Campbell’s wall. I’m nine years old. A policeman posted at the fork of the road stands to attention. There is the sound of sombre music, coming closer. The RUC band, they’re marching the slow march, advancing slowly in half-step, carrying the coffin of a policeman neighbour killed by a bomb on the Border. They are playing Handel. The funeral march.

The sun glints from their instruments, from the epaulettes of the police and military, from the gold watches of big-house politicians. They cross the brow of the next hill. The music fades. It felt as if they had momentarily emerged from another dimension, following a malign offshoot of the Border, an inked-in contour line drawn from a rural home to a fresh grave.

James Baldwin said that people are trapped in history and history is trapped in them.

Driving along the Border with my brother in summer 2009. Heading for the Flat Lake Festival in Clones. Heaney is reading, or Muldoon. Jinx Lennon and Paula Flynn singing Border anthems to the giant orange cranes in Greenore. Clones emptied of its between-the-wars bustle, the hollowed out borough, its hinterland snatched away in partition. Up around Cullaville the sun is shining. Elderflowers in the ditches. A distant Slieve Gullion in the midsummer haze.

Shane turns to me: was that all a dream? We’d both worked either side of the Border, travelled across it to school. Running the gauntlet. Soldiers lying in ditches. Checkpoints. Culvert bombs. Assassins, agents and fraudsters. We knew that fear was the whole point of this locale, the not knowing what’s around the corner, the not knowing who is watching. The whole corpse-reek and mess of it all. We spend the rest of the drive talking Border lore. We’re like recovering alcoholics sitting in a basement room, blurting out narratives of fault and loss.

Was it a dream? He’d hit the nail on the head. One of those dreams that doesn’t quite fade with waking. Your head full of the irrational, sinister juxtapositions. Viktor Orbán’s shining razor wire buried in the Cullaville foxgloves and dog roses. You’d go back to sleep and dream of concrete walls in barren terrain, migrants walking in the desert at night. Columns of the drowned marching up Aegean beaches.

The question of the Irish Border needs to be isolated from the sphere of economics and considered in the context of fundamental rights. The answers lie in the moral and progressive sphere. Theresa May can insist that her country leaves the European Union. The EU can dictate what conditions it wishes. But neither of them can dictate or insist that a line of malice be redrawn across this island. We could not ask that the Berlin wall be re-erected. It was an affront to the spirit. Berlin and the rest of Europe cannot use economics to require that we re-impose the border. Not in this century. Not on this island.

Start with that as the bottom line and construct the politics from there. Make political and economic structures an outcome of the absence of the Border, not the other way around.

You’d like to think Europe knew something of this and valued it. Their project faltering on the back of alienation and lack of accountabilty. Ireland one of the few places where the Europe of quiet-spoken post-war visionaries, modernists in two-piece suits, still stands on solid ground. Where the earnest work of being Europeans has borne some fruit.

There’s an analogy with social politics. Common cause as well. Hard-won gains in woman’s rights. The tender accommodations of our gay children become law, fundamental rights acknowledged. Values that we thought we had achieved, marked down as won and made part of the foundations of better living until you hear the cynical growl of the authoritarian counter offensive. Telling us that these gains are provisional. Telling us that what they have given they can take back.

A young woman sits in a bedroom adding sequins to a wedding dress, putting her dreams into it, stitch by stitch. Within earshot of the Haulbowline light’s foghorn on Carlingford Lough. Within sightline of the dark Cooley shore and the forbidden country beyond. Part of a generation that saw themselves as progressive and came up short, defeated.

A few houses away a young man is putting on a uniform to go on Border patrol, defender of a line whose dark heart and purpose was indifferent to both of them.

Ghost brides and ghost patrols in the realm of the unsaid. Old uniforms folded and put away. Void garments left to hang in empty cupboards.

Eoin McNamee from Co Down is the author of Resurrection Man, which probed the brutality of the Shankill Butchers, and The Ultras, which dealt with the killing of Robert Nairac