Son of late cleric not among crowd of more than 1,600 who attended Galway service

A total of 11 bishops and 61 priests took part in the concelebrated Mass at in Galway’s Cathedral of Our Lady Assumed into Heaven and St Nicholas. Many people were standing in the cathedral which has a capacity of 1,600. Video: Joe O'Shaughnessy 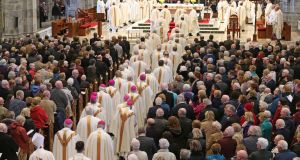 The procession to the altar before the funeral Mass of former Bishop of Galway Eamonn Casey at Galway Cathedral. Photograph: Joe O’Shaughnessy. 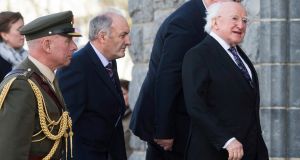 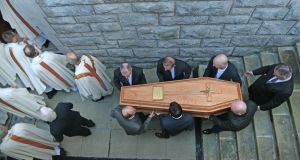 Nephews of former Bishop of Galway Eamonn Casey carry his remains to the crypt at Galway Cathedral. Photograph: Joe O’Shaughnessy.

Bishop Eamonn Casey was a man who did much good but had “hidden realities” in his life which proved earth-shattering for the Catholic Church, his funeral Mass was told.

A total of 11 bishops and 61 priests took part in the concelebrated Mass at in Galway’s Cathedral of Our Lady Assumed into Heaven and St Nicholas. Many people were standing in the cathedral which has a capacity of 1,600.

Bishop Casey, who died aged 89 on Monday following a long illness, was interred afterwards in the cathedral’s crypt .

The main celebrant was Bishop of Clonfert John Kirby, who succeeded Bishop Casey as chair of Trócaire.

Before the Mass began he welcomed President Michael D Higgins with the words “ar chuid mhaith cúrsaí bheadh an intinn céanna ag an mbeirt acu, an tEasbag Eamonn agus Mícheál D (on a lot of things they were of the same mind, Bishop Eamonn and Michael D)”.

Bishop Kirby expressed sympathy with the Casey family, his brother Fr Mícheál Casey in Australia, his sister Ita Furlong, his son Peter Murphy and Peter’s mother Annie, who were all unable to attend.

In the homily, Bishop of Achonry Brendan Kelly said Bishop Casey’s funeral Mass was “neither the time nor the place” to address events 25 years ago concerning “hidden realities in his life” including the fact he had a son.

These realities “were nothing less than earth-shattering for the church and for people in general”, he said.

Bishop Kelly said “we are all sinners, but irresponsibility, infidelity and sin are particularly shocking in the lives of those who preach the Gospel.

“In 1992 Bishop Eamonn resigned and left the country. He expressed his sorrow many times, apologised and asked for forgiveness.”

He recalled how there were also “those of us who remember, with gratitude, his kindness and encouragement when personally we most needed it,” he said.

Bishop Casey “had a long life as priest and bishop. He did much good.”

As a young priest in London “he enabled many young couples to acquire their first home, to rise out of tenements and homelessness and thereby anchor their families in positive community environments.

He said that Bishop Casey then became known, while working as a bishop in Kerry and then Galway, as a “man of energy and initiative” and “a doer” through his work with Trócaire and as a defender of the rights of the poor and oppressed.

Bishop Kelly said Bishop Casey was particularly remembered “for his courage” as he helped stricken people after soldiers opened fire at the funeral of Archbishop Oscar Romero in San Salvador in March 1980.

Concluding, Bishop Kelly recalled how Ash Wednesday a fortnight ago “marked the beginning of the last stage in Bishop Eamonn’s life journey” when his “health deteriorated further”.

Prayers were offered during the service for the crew of the Irish Coast Guard helicopter Rescue 116 which crashed off the Co Mayo coast on Monday night.