World Meeting of Families welcoming to all, says Archbishop Martin

The Festival of Families event set to take place at Croke Park during the visit of Pope Francis to Ireland in August will feature performances by Riverdance, Nathan Carter and Daniel O'Donnell. 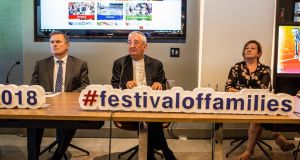 Mistakes were made where same sex-people were concerned in preparation for the World Meeting of Families, Archbishop Diarmuid Martin has said.

As the person in charge he took responsibility for what happened. But he insisted “the overall thrust of the preparation has been welcoming everybody and that remains the thrust”.

Last January five pictures of same-sex couples were removed from preparatory leaflets for the World Meeting of Families. Moreover, a video by Auxiliary Bishop of Los Angeles David O’Connell was edited to exclude his statement that all families would be welcome at the event, including gay families.

Cardinal Kevin Farrell, prefect of the Vatican’s Dicastery for the Laity, Family and Life – which oversees organisation of the World Meeting of Families from Rome – said he was not responsible for removal of the pictures or for editing Bishop O’Connell’s comments.

The situation of same-sex married couples in the Church would be addressed “in the RDS programme”, he said, referring to the three-day pastoral congress next month. The congress was also “one of the few conferences of that kind in which women speakers are in a majority”, he said.

He dismissed as “speculation” reports that Pope Francis would visit the former Magdalene Laundry on Dublin’s Sean MacDermott Street. As to the Pope meeting abuse victims, he said “we are looking at ways that can be done with discretion and can be done in the time that’s available to the Pope”.

Asked what it said about Ireland that within weeks of the abortion referendum all events related to the World Meeting of Families and the visit of Pope Francis were booked out, he responded: “It says a lot about Pope Francis.”

The Pope, he continued, “appears to many people as a modern Pope, a Pope who can reiterate, reaffirm Church doctrine but also recognise that people live in grey areas”.

The Archbishop recalled how, in one of his first interviews, Pope Francis described himself as “a sinner”. It summed up “many of the realities of his life. If he claims and feels that he’s a sinner how can he be arrogant to other people who are sinners?” asked the Archbishop.

“That’s the sort of thing the Irish church has to learn, not to be condemnatory, not to be alienating but to develop this sensitivity that all of us are on a road,” he said.

Next month’s events “will give all of us a chance to reflect on what has happened, what has been gained, what has been lost and how do we work together to build the values that will hold Irish society together. One way or the other families are part of that,” he said.

It would be “a huge event”, “a showcase for Ireland as we move to the future.” He was pleased to see a report from Wednesday’s ’s Cabinet meeting which “saw the same thing. This it is a way to showcase the Ireland of the future.”