Gender glossary: Do you know your intersex from skoliosexual?

Definitions of gender and sexuality 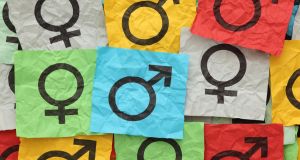 The Government plans to remove restrictions on children under 16 changing their gender.

In light of Government plans to remove the restriction on children under 16 changing their gender, here is a glossary of terms around gender and sexuality, compiled by Sam Killermann and Meg Bolger of TheSafeZoneProject.com

LGBTQ/GSM/DSG/QUILTBAG – LGBTQ is lesbian, gay, bisexual, transgender and queer and/or questioning (sometimes with a “+” at the end in an effort to be more inclusive); GSM is gender and sexual minorities; DSG is diverse genders and sexualities. Quiltbag is queer (or questioning), undecided, intersex, lesbian, trans, bisexual, asexual (or allied) and gay (or genderqueer).

Ally – A (typically straight – or cis-identified) person who supports, and respects members of the LGBTQ community. While the word doesn’t necessitate action, we consider people to be active allies who take action upon this support and respect, this also indicates to others that you are an ally.

Bigender – A person who fluctuates between traditionally “woman” and “man” gender-based behaviour and identities, identifying with both genders (and sometimes a third gender).

Biological sex – A medical term used to refer to the chromosomal, hormonal and anatomical characteristics that are used to classify an individual as female or male or intersex.

Fluid(ity) – Generally with another term attached, like gender-fluid or fluid-sexuality, fluid(ity) describes an identity that may change or shift over time between or within the mix of the options available (eg, man and woman, bi and straight).

Gender expression – The external display of gender, through a combination of dress, demeanour, social behaviour and other factors, generally measured on a scale of masculinity and femininity.

Gender identity – The internal perception of an one’s gender, and how they label themselves, based on how much they align or don’t align with what they understand their options for gender to be.

Genderqueer – A gender identity label often used by people who do not identify with the binary of man/woman; or as an umbrella term for many gender non-conforming or non-binary identities (eg, agender, bigender, genderfluid).

Intersex – Someone whose combination of chromosomes, gonads, hormones, internal sex organs, and genitals differs from the two expected patterns of male or female. Formerly known as hermaphrodite (or hermaphroditic), but these terms are now considered outdated and derogatory.

Pansexual – A person who experiences sexual, romantic, physical or spiritual attraction for members of all gender identities and expressions.

Queer – Used as an umbrella term to describe individuals who don’t identify as straight. Due to its historical use as a derogatory term, it is not embraced by all LGBTQ people.

Questioning – An individual who or when someone is unsure about or is exploring their own sexual orientation or gender identity.

Skoliosexual – Attracted to genderqueer and transsexual people and expressions.

Third gender – A person who does not identify with either “man” or “woman” but identifies with another gender.

Transgender – An umbrella term covering a range of identities that transgress socially defined gender norms. Trans with an * is often used to indicate that you are referring to the larger group nature of the term. (2) A person who lives as a member of a gender other than that expected based on anatomical sex.

Transitioning – This term is primarily used to refer to the process a trans person undergoes when changing their bodily appearance either to be more congruent with the gender/sex they feel themselves to be and/or to be in harmony with their preferred gender expression.

Transsexual – A person who identifies psychologically as a gender/sex other than the one to which they were assigned at birth. Transsexuals often wish to transform their bodies hormonally and surgically to match their inner sense of gender/sex.

Transvestite – A person who dresses as the binary opposite gender expression (“cross-dresses”) for any one of many reasons, including relaxation, fun, and sexual gratification (often called a “cross-dresser,” and should not be confused with transsexual). - Guardian