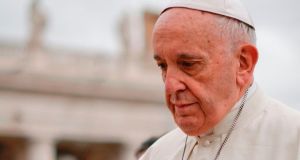 Pope Francis is due to visit Ireland in August. Photograph: Andrew Medichini/AP

A man who says he will not be attending the pope’s Mass in the Phoenix Park claims he has booked 800 tickets in protest, including several under the name “Jesus Christ.”

A Facebook page protesting the August visit of Pope Francis to Ireland is encouraging people to book large numbers of free tickets, which will not be used, to ensure a low turnout at events.

Jonathan Keane (32) is one member of the ‘Say Nope to the Pope’ Facebook event page. Over 1,000 people have clicked “attending” and another 4,000 marked themselves as “interested” on the social media platform.

Mr Keane told The Irish Times he booked 800 tickets on Monday, by using various different names and email addresses, on the World Meeting of Families website.

He booked one batch of tickets for the Phoenix Park mass under the name “Jesus Christ,” he said.

“There’s been lots of people saying they’d got 60 tickets” on the page yesterday he said, and he estimated that “easily thousands” of tickets had been booked by members of the page, who would not be attending any events.

When booking went live on Monday, 285,000 of the 500,000 tickets for the papal Mass in Dublin’s Phoenix Park had been secured by 5pm. Tickets are free, but people are asked to consider making a donation when booking.

The World Meeting of Families is an international conference held every three years by the Catholic Church.

Mr Keane, who lives in Cork city, said the ‘Say Nope to the Pope’ page was a “peaceful protest”, which had taken off in the last few days. “It’s a lot bigger than I thought it’d be,” he said.

The organisers of the Facebook page have received criticism online, for taking up tickets that other members of the public who want to attend the events might miss out on.

“I’ve been called a lot of names, I don’t take any notice of them. Whatever you do in Ireland you get complaints,” Mr Keane said.

The pope’s visit to Ireland will begin on August 25th, when he flies from Rome to Dublin. The papal Mass will take place the following day on Sunday, at 3pm in the Phoenix Park, and he will return to Rome later that day.

One Facebook posting on the event page claims “you can book as many times as you like on the same email address . I’ve booked 12 (9 time) so 108 tickets. They all have different booking references so they are working.”

Another reads “12 empty spaces booked, all walking from Galway” with a laughing emoji.

Referring to the campaign “A.O.R (Anne O’Reilly)” has tweeted “there are sadly a lot of anti-Catholics getting free tickets online for the Pope’s Mass - just so that the event will look poorly attended. One girl - a Michelle Dunne on Facebook claims to have got 108 tickets.”

Businessman Declan Ganley tweeted “unintentionally, hard lefties show why when you make stuff ‘free’ it gets wasted by those with scant appreciation. Without price, you drive massive over consumption by abusers (and) detach supply from authentic demand. Even a nominal 1 euro would have stopped some of this.”

In a second tweet, he added, “they have parishes and parishes know who their regulars are and who they aren’t.”

From England, Deacon Paul Conneely tweeted that “when Benedict XVI visited the UK the ‘tickets’ were allocated to individual Deaneries to allocate to parish groups and parishioners. No abuse and all authentically used.”

Mr Ganley also disclosed in tweet that when he went online this morning to book tickets for the papal visit to Knock, they were “all gone”.

Organisers of World Meeting of Families events in Dublin next August have expressed confidence that their system will make such campaigns null and void.

Spokeswoman Brenda Drumm said such activity is par for the course with any free event. “The system can manage it through the use of algorithms and by checking email addresses,” she said. “We are confident the system can manage.” Individuals are restricted to booking 12 tickets at a time.

1 Coronavirus: More ‘striking’ evidence BCG vaccine might protect against Covid-19
2 Coronavirus: Doctors fear Covid-19 yet to peak in the State as ICUs near full capacity
3 Meet the Irish woman leading New Zealand’s Covid-19 response
4 Coronavirus Q&A: What new powers have the gardaí been given?
5 This time, the future of the euro really is at stake
Real news has value SUBSCRIBE