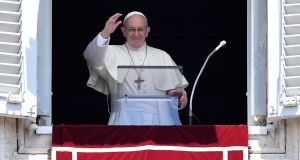 The State should use the visit of Pope Francis to send a message that Ireland is diverse, inclusive and respectful, the Cabinet has been advised.

Ministers were briefed yesterday on a memo from the Department of the Taoiseach on the upcoming visit of the pope to Ireland in late August and some minor amendments to his itinerary.

The Cabinet was advised this was a “significant visit by one of the most recognised leaders” and that the State would provide all the necessary assistance that is appropriate for such a visit.

However, Ministers were warned there were health and safety concerns and security risks surrounding the pope’s visit.

During his trip, Pope Francis is due to visit the Knock Shrine and will be the main celebrant for the final Mass of the World Meeting of Families event in the Phoenix Park.

The Cabinet was told neither venue was built to deal with events of such magnitude and they therefore carry a number of potential risks.

It is understood gardaí have advised that risk factors at these venues include the age profile of the audience, the length of time individuals will be in the venues and transportation to and from the events.

Pope Francis will also travel through Dublin city centre in the Popemobile, which carries a number of obvious security risks.

The costs of his visit will be largely borne by the Office of Public Works and An Garda Síochána, but a final figure for this is not yet known.

Ministers were also advised Pope Francis will attend an event in Dublin Castle, where he and Taoiseach Leo Varadkar will make an address.

Ministers were advised they can attend this, while TDs and Senators have been told they and four family members can be present at any of the events.

The State will use the visit as an opportunity to outline its belief that Ireland is a welcoming, diverse, inclusive and respectful society, the memo stated.

The pope is in Ireland for the World Meeting of Families, which has been criticised for failing to include LGBTI+ families.