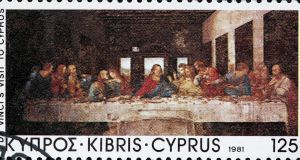 Tomorrow, Palm Sunday, marks the beginning of Holy Week, that sacred space in time when Christians follow the steps of Jesus and his followers toward Good Friday and beyond, events which have impacted far beyond the realms of religion.

One of those events was the institution of the Eucharist, which took place when Jesus and his closest followers gathered to share the Passover meal, a scene captured in Leonardo da Vinci’s The Last Supper, a late15th-century mural in the refectory of the monastery of Santa Maria delle Grazie in Milan.

The painting captures not only the moment when Jesus tells the disciples that one of them would betray him, it also conveys the artist’s understanding of how the disciples reacted.

The American author Walter Isaacson, in his recent biography of Leonardo da Vinci, makes some interesting observations based on Leonardo’s known interest in body language and especially the hand gestures for which Italians are well known.

He had observed how monks, though silent, could communicate with each other, non-verbally, by hand gestures.

Isaacson suggests the artist makes use of this in his painting, thus allowing us to eavesdrop as it were on what is going on.

So, an agitated Peter demands to know who Jesus is talking about, while John remains calm and still.

Judas, ugly and hook nosed, clutching the bag of silver, is painted in shadow, leaning away from Jesus but with his hand reaching out for the incriminating bread that he and Jesus are about to share (“He that dippeth his hand with me in the dish will betray me”).

Incidentally when Leonardo was looking for a face to copy as Judas, he was drawn to the Prior of the Abbey, who he disliked because the man had pressured him to complete the mural quickly and leave.

Thomas points his finger as he speaks. Could this be the same finger, Isaacson wonders, that would later be placed in the wounds of the risen Christ to change Thomas from doubter to believer?

Bartholomew is on his feet protesting, ready for action. Matthew, Thaddeus and Simon are in a group, gesticulating. Thaddeus is shown banging the table in an “I knew it” gesture.

Are Matthew’s two upturned palms a “what’s going on?” moment of despair as he looks to Simon for an answer?

Jesus, painted slightly larger than the other figures, is central, calm and in control.

Isaacson draws attention to his right hand reaching for a stemless glass one-third filled with red wine, his little finger seen through the glass and just beyond the glass are a dish and a piece of bread. This is a Eucharistic scene.

Some20 years later St Paul in a letter to the Corinthians would write: “The Lord Jesus, on the night he was betrayed, took bread, and when he had given thanks, he broke it and said, ‘This is my body, which is for you; do this in remembrance of me’.”

Looking at this work from the perspective of the church today, one is confronted with the centrality of Jesus. The accomplishment of his mission at that vital time does not depend in any way on the confused and unreliable people around him.

The betrayer is identified; most of the others would abandon him at the first sign of trouble.

But despite their imperfections, the disciples did have a later role as the sun rose on the first Easter morning for we inherit our faith from that same argumentative and at times disloyal group of people who, despite everything, realised that they had something worth sharing and in some cases worth dying for.

It’s easy to become disillusioned with the church of today and its failings, but the church is not the message; Jesus Christ is the message.

“He became human that we might become divine; he revealed himself in a body that we might understand the unseen Father; he endured man’s insults that we might inherit immortality.” – St Athanasius of Alexandria.