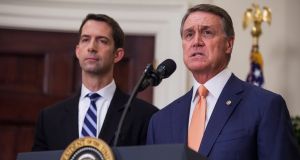 The sponsors of the new Bill, which would reduce legal immigration to the US, Republican senators Tom Cotton of Arkansas and David Perdue of Georgia. Photograph: Zach Gibson/EPA

US president Donald Trump’s latest immigration initiative aimed at limiting visas to high-skilled workers “is going nowhere”, according to well-placed Irish observers on both sides of the Atlantic.

On Wednesday, Mr Trump endorsed new legislation that would reduce legal immigration to the US. The new Bill’s sponsors are Republican senators Tom Cotton of Arkansas and David Perdue of Georgia.

However, Ciarán Staunton of the Irish Lobby for Immigration Reform in New York said “it would take the two parties [Republicans and Democrats] working together” to bring about immigration reform in the US, “ if they are serious about immigration”.

The latest announcement by the president had “already achieved what it had set out to achieve”, he said. It had removed the latest “White House shenanigans from the front pages and the attacks on [attorney general] Sessions, as well as rallying people to his side. He’s playing to the gallery.”

It was also the case that “it takes very few people to introduce a Bill,” he said. Besides, what the Bill “set out to do is being achieved already”. Deportations that had begun under former president Barack Obama“have not eased up this year and could reach four million”, he said. Two million people were deported under Mr Obama.

“When a federal system is in place it just doesn’t stop with an executive change,” he said. “Obama was deporter-in-chief. He deported more people than any other president in history.” However “apart from law breakers there is no method of knowing who is illegal or not”, he said.

Prof Liam Kennedy of UCD’s Clinton Institute also felt Mr Trump might be “playing to his base” and that he would struggle to get the Bill through Congress and the Senate.

“Too many Republicans are opposed and too many States would suffer” through loss of labour. It would be “a hard sell, but very good for President Trump”, he said.

It was “another play by [Steve] Bannon and company at the White House, which allowed Trump’s base see he was doing what he said he would do, even if it is frustrated”, he felt.

On the other hand, were such a Bill to become law, “it could prove opportune for a certain number of the Irish and allow them to come out of the shadows. But I don’t see that at the moment,” he said.

Fr Alan Hilliard, of the Irish Catholic Bishops’ council for emigrants, spoke of the “huge range of confusion on immigration policy” in the US, and which would be “difficult to reform”.

In the 20th century, proposals for such reform tended to be civil rights-based, he said, while in recent times it was more rooted in economics. “It’s now about the rights of business.”

Fr Hilliard continued: “Some immigration policies in place have created illegality, such as students. A lot were becoming illegal when their visas ran out.” But, even were the proposed Bill to become law, “going after the brightest and best, they too will want people working for them”.