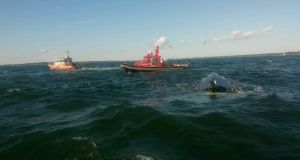 The coastguard said that the boat was struggling and overloaded with passengers before it overturned. Photograph: US Coast Guard

An eight-year-old boy from Tipperary has died in hospital following a boating accident in Massachusetts.

One of the children, Harry O’Connor, who comes from Clonmel but was living in Boston, died on Sunday as a result of his injuries. It is understood he had been trapped underwater for about 20 minutes before being rescued by a diver and airlifted to hospital.

A witness told local media that the boat appeard to be struggling before it overturned.

The other passengers did not suffer serious injuries.

Harry lived in Sudbury, Boston, with his parents Paudie O’Connor and Laura Lenehan and siblings Ellen, Charlie and Joe. Before moving to America, the O’Connor family lived in Poulnaganogue, Clonmel where Harry attended the local Gaelscoil.

The accident happened when the group were on a family outing a motorboat. An onlooker witnessed the incident and called the coastguard which despatched a rescue helicopter to the scene.

Nearby boats and divers also came to the group’s aid.

“They were crying. They were shivering and hyperventilating,” Martin van Breems, who helped in the rescue, told local news station WCVB. “We had two or three guys on each person. We had one person holding the line and bringing them up.”

Mr van Breems is a sailing instructor who had been practicing man overboard drills with his students at the time.

“We got them on board, we got them down below. They were crying and shivering and hyperventilating. We could see that they looked like they might have been in shock.”

“Not the lesson we kind of intended, but we were glad to be there and glad to be able to help them,” he said.

Harry was found lodged under the hull of the boat by diver, Michael Margulis.

“I was able to recognise the life preserver and pull the child who was lodged underneath the boat,” he told the station.

He brought Harry to the surface before the child was airlifted to a nearby hospital.

Harry’s body is being brought home to Ireland for the funeral which will take place on Thursday in Duleek, Co Meath.

This article was amended on August 1st