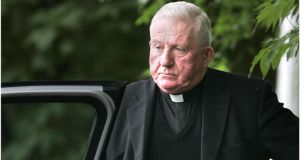 Requiem Masses will be held in Dublin and Ennis, Co Clare this week for Bishop Fiachra Ó Ceallaigh, former Auxiliary Bishop of Dublin, who died on Sunday aged 84.

In 1994 he was ordained an Auxiliary Bishop of Dublin, becoming the first Franciscan to serve as a bishop in Ireland for over 170 years. He retired in 2009.

Archbishop Martin described him as “an outstanding witness to the motto he took on his episcopal appointment ‘Dia Ár Misneach’ (God is our courage), particularly so as he struggled with illness for the last several years since his retirement.”

He also commended his “tireless work promoting the Irish language in the diocese in his work with Coiste Tréadach.”

The Catholic Primate Archbishop Eamon Martin said he had always heard Bishop Ó Ceallaigh “spoken of as a kind and deeply devout pastor who faithfully served the people of Dublin as auxiliary bishop for 15 years”.

His interest in “the plight of asylum seekers and refugees was always to the fore at Bishops’ meetings,” he remembered. He was “a warm and caring man, who despite ongoing illness, was well known for his dedication, wisdom and generosity of spirit,” he said.

His remains will repose at Adam & Eve’s Church on Merchant’s Quay from 4pm on Wednesday.

Reception of his remains with Archbishop Diarmuid Martin will take place in Adam & Eve’s at 7pm. Requiem Mass (in Irish) will be on Thursday morning at 10.30in the Pro Cathedral with Fr Liam O Cuiv as principal celebrant.

On Thursday evening there will also be prayers at the Franciscan Friaryin Ennis, Co Clare followed by Requiem Mass there at 11.30 am on Friday. Burial afterwards will be in Lisseycasey.