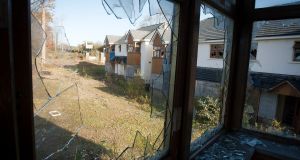 The Department of Housing also plans to revisit ghost estates as a potential source of vacant homes. Photograph: Garry O’Neill

Local authorities must make greater use of compulsory purchase orders to acquire vacant homes for social housing, the Department of Housing, Planning and Local Government has declared.

Meanwhile, the owners of unoccupied properties could face extra taxes if they remain empty for more than a year, according to the Government’s National Vacant Housing Reuse Strategy 2018-2021 strategy.

A number of local authorities “have begun to start making use of their compulsory purchase powers in order to bring vacant and derelict properties back into use for social housing”.

Calling for action to tackle high vacancy rates and serious housing shortages, the document says that CPOs can deliver social housing “more speedily... and at a much lower cost than new builds”.

In 2016, the Central Statistics Office put the number at 183,312, excluding holiday homes, but the Ordnance Survey Ireland working with An Post recently put it significantly lower at 96,640.

Using the CSO figure, the report pointed out that the number of empty houses has fallen “by almost 47,000” between 2011 and 2016, but “it is nonetheless imperative that we encourage further reduction”.

It has become “increasingly apparent” that the issue is “more complex than might appear from a simple analysis of headline vacancy numbers”, said the strategy paper.

“Further, it needs to be determined what proportion of those houses are in areas of high demand or indeed are potentially recoverable for use. We must also gain a better understanding of the reasons behind vacancy,” it went on.

Louth County Council has led the way in its use of CPOs to acquire vacant housing and in the last two years has acquired about 60.

The council’s director of housing, Joe McGuinness, has described the process as “easy and successful”.

Louth found that its CPO purchases did not affect local prices as the ones acquired were not on the market; each cost less than new-builds and were brought into use more quickly. Refurbishment helped local construction jobs, too.

The strategy will “focus on driving all local authorities to adopt a proactive approach in utilising their available legislative powers with the added commitment that, if further... powers are needed to make the system work effectively detailed consideration will be given at the earliest opportunity to the introduction of those powers”.

A “vacant homes officer” will be appointed in each local authority and a dedicated vacant homes unit is to be set up in the department to coordinate their work.

Meanwhile, the report pledged to ensure that the Housing Agency will have “adequate capital funding” so that it can intervene to buy vacant properties, before selling them on to housing associations.

The Department of Finance is examining whether “the potential application of a tax on vacant homes” could be introduced under the 2017 Finance Act.

The long-awaited strategy on vacant housing, published by the Department of Housing, comes as the latest data, for June, put the number of homeless people at 9,862, including 3,824 children, and an increasing reliance of middle- and low-income households on the private-rented sector, seen by many as an insecure form of housing.

Vacancy rates vary across the country from an estimated 3.6 per cent of housing stock in south Dublin county, to 19.9 per cent in Leitrim.

A “vacancy sub-group”, with representatives from these agencies, will work in the department to come up with a standardised method of counting vacant dwellings. It has begun a pilot field-based survey in six counties.

The department also plans to revisit ghost estates as a potential source of vacant homes, and to reduce regulatory barriers to bringing “over the shop” dwellings back into housing use.

The Simon Communities of Ireland has backed the plan calling also for compulsory leasing powers, where local authorities could force a property owner to lease it to the council for social housing.

Meanwhile, the Department of Housing pledged to work with other government agencies to examine measures that will encourage the rental of properties vacated by older people going to nursing homes.

1 Officials refuse to rule out ‘Midlands lockdown’ following Covid-19 surge
2 Masks Q&A: Who has to wear them in shops and what happens if you don’t?
3 How a ship abandoned by its owner brought deadly cargo to Beirut
4 Reopening of schools in many EU countries has not led to Covid-19 increase, ECDE report finds
5 Ireland's 'R number' of almost 2 a 'serious concern' as number of new cases jumps
Real news has value SUBSCRIBE