A parade to garner support for trans people was held on Saturday 28th July in Dublin. 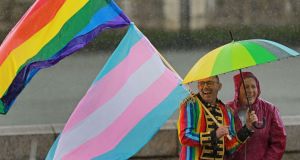 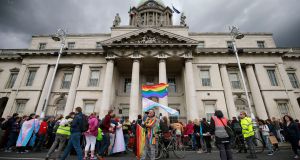 Eddie McGuinness (centre) as protesters gather at the Custom House in Dublin. Photograph: Nick Bradshaw for The Irish Times 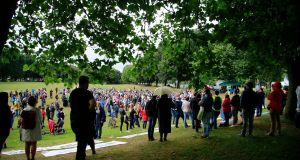 Hundreds of people made their way to Fairview Park in Dublin where Declan Flynn was murdered 36 years ago. Photograph: Nick Bradshaw for The Irish Times 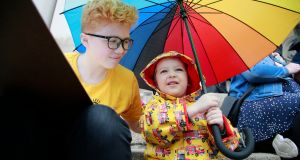 Jason and Oisín getting ready for the march. Photograph: Nick Bradshaw for The Irish Times

Hundreds of people marched through Dublin on Saturday in the city’s first ever trans pride protest.

The lively spirit among participants was not dampened by the torrential downpour which accompanied the shouts and roars for greater recognition of trans rights in Ireland.

Demonstrators called for improved transgender healthcare and the separation of church and State as they made their way from Liberty Hall to Fairview.

Freddie Trevaskis-Hoskin from Dublin said the protest offered members of queer communities who feel “ostracised by the mainstream movement” a chance to air their grievances. Trevaskis-Hoskin echoed the sentiments of a number of speakers at Saturday’s protest in describing the Dublin Pride parade, which took place last month, as a “marketing tool where members of the queer community who are white, middle-class and often male are allowed to assimilate into society”.

“We see companies like Google and YouTube marching at the front of the march, which is meant to be a protest march, a march for what we disagree with in society on how we’re treated,” said Trevaskis-Hoskin.

Ray Leonard said Saturday’s protest gave trans and non-binary people the chance to raise awareness of the “cultural oppression, abuse and discrimination” they experience on a daily basis. While Ireland is slowly changing in its approach in terms of gay and lesbian rights and gender recognition, it still has a long way to go when it comes to trans rights, said Leonard.

“This is a beginning but it’s a welcome beginning. Unfortunately there’s a lot more work needed to be done in terms of housing, employment and supporting healthcare for members of the transgender community because there’s still a lot of discrimination. It’s very difficult for members of the transgender community to actually find a place to live where they feel safe . . . where they’re not going to have rocks thrown at them or be name called.”

Speaking to the crowd in Fairview Park – where 36 years ago Declan Flynn was kicked and beaten to death in a homophobic attack – Noah Halpin voiced frustration at the lack of healthcare options for trans and non-binary people in this country. Listing out a series of demands to the Minister for Health, Halpin underlined the lack of medical practitioners available to trans people seeking care.

“It’s not good enough that we must be diagnosed with a psychiatric condition just to access the healthcare we need,” he said to cheers from the crowd.

“It’s not good enough that there’s only one surgeon in Ireland who will provide surgery to trans masculine people and that their waiting list is years and years long.”

Cearbhall Turraoin from Sex Workers Alliance Ireland warned of a rise in hate crime towards trans sex workers since the change in law last year which criminalised the purchase of sex.

“It’s appropriate that we’re here in Fairview Park where Declan Flynn was murdered many years ago, that we talk about hate crime and the impact these hate crimes are having in Ireland,” said Turraoin. “Three years after the marriage-equality referendum we’re still seeing very high rates of violence.”

The march follows a report to the Government concerning the Gender Recognition Bill which recommended that all children under the age of 18 should be allowed to change their gender if they have consent from both parents. The report was written by Moninne Griffith, executive director of LGBT youth organisation “BeLonG To”.