Thirteen men have begun training for or are considering priesthood 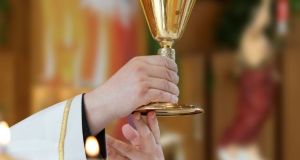 The figure includes an unspecified number undergoing a one-year pre-seminary programme for those considering whether they have a vocation. File photograph: Getty Images

A total of 13 men have begun training for the Catholic priesthood in Ireland this year including an unspecified number undergoing a one-year pre-seminary programme for those considering whether they have a vocation.

In 2018 the Vatican issued a document which “strongly recommends to bishops around the world the introduction of a pre-seminary (propaedeutic) programme for new candidates who wish to discern their priestly vocation.”

The figure issued by the Catholic Communications office on Monday includes men at St Patrick’s College, Maynooth, the Redemptoris Mater Seminary in Dundalk, Co Louth, as well as men at Beda College and the English College in Rome, as well as at the Scots College in Salamanca and the Royal English College at Valladolid, both in Spain.

Its statement said “this brings to 72 the total number studying for the priesthood for Irish dioceses.”

In figures provided to The Irish Times last November there were 33 resident seminarians at St Patrick’s College, Maynooth, with 25 non-resident, these latter belonging mainly to religious congregations. Included were men from Cameroon, Sri Lanka, Ukraine, Croatia and the Czech republic.

Meanwhile five men have been ordained to the Catholic priesthood in Ireland this year to date and two new Catholic bishops have been installed.

On Sunday August 30th former parish priest of Newbridge, Co Kildare was ordained Bishop of Achonry at the Cathedral of the Annunciation and St Nathy at Ballaghaderreen, Co Roscommon.